NAB HITS OUT AT INSURERS AND REGULATORY BODIES 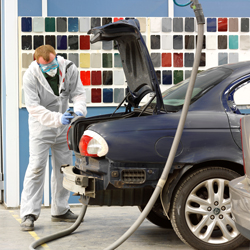 The National Association of Bodyshops has criticised the behaviour of insurers, the Financial Conduct Authority and the Insurance Ombudsman for their parts in the investigation into the private insurance market and failure to protect consumers from ‘unrestrained opaque relationships’.

It says insurers actions in the Competition Commission investigation into the private motor insurance market, and regulatory bodies’ failure to protect consumers, creates an unsustainable environment for bodyshops.

The NAB adds that regulatory bodies have allowed insurers to ‘conduct unrestrained opaque relationships with each other’, manipulating consumers at times of stress, profiting from rebates and operating tax avoidance measures.

Head of the NAB Frank Harvey said: “NAB suggests that many of the observations and supporting documents provided to the CC by the insurance industry do not materially change our view that the tripartite relationship between consumers, insurers and bodyshops is unbalanced and that consumers are suffering detriment due to the current dysfunctional nature of the insurance claims process.

“This is not a sustainable position for our members or the body repair industry as an entity, or for long term consumer satisfaction.”

The NAB is suggesting that the FCA has failed to work within its own governance, by not carrying out regular assessments, ensuring against products that compromise consumers and responding quickly and decisively to problems threatening the integrity of the industry.

Harvey said:  “Over two decades, these matters have been placed on record with various government departments, the FCA, the Insurance Ombudsman, the Office of Fair Trading and now the Competition Commission by the Retail Motor Industry Federation, NAB and others.

“Organisations that were set up to protect consumers have clearly failed them according to the provisional findings of the CC.”

NAB also has concerns about the scope of the CC investigation.  In its response to the CC’s provisional findings, Harvey says: “NAB believes the CC’s terms of reference for its investigation have been narrow and overly simplistic given the complex nature of the motor insurance claims process.

“NAB argues the Provisional Findings and Suggested Remedies provided by the CC will not address market dysfunction nor will they eliminate consumer detriment because they do not apply across the whole motor insurance market.”

The broadside comes after the NAB also raised concerns over the MSXI survey data having critical documentation deficiencies which means it can offer minimal value to the CC’s investigation.