Lubricant distributor The Race Group has announced that it has renewed its partnership with Castrol with a new five-year contract, extending its supply of product to customers in the South of England in addition to the Midlands and the North which were covered int the previous agreement. 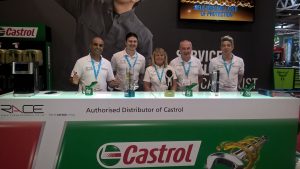 The contract secures The Race Group, part of nationwide distributor Certas Energy, as Castrol’s largest authorised distributor in the UK.

Andrew Salton, General Manager at Certas Energy and Sales Manager at The Race Group, commented, “This is great news for both current and new customers who will experience improved levels of service and technical knowledge”.

Mark  Scarisbrick, Distributor Manager at Castrol UK, added,“As our chosen route to market, we awarded The Race Group the contract to grow the Castrol brand in the South of England. We are confident that customers will enjoy a professional service that delivers business results. Given our long standing partnership we have the utmost trust in their experience, expertise and capabilities to be an ambassador of the Castrol brand across the South of England”.