We get to some odd places for CAT Connections, but the giant Ecobat battery recycling plant on an industrial estate on the edge of Darlaston has to rank as one of the most surreal. On entering the main plant, you go up a flight of stairs and look out over the shop floor, and once your eyes are accustomed to the gloom, you can see a gigantic, hellish-looking machine apparently swallowing a never-ending diet of domestic batteries, fed to it through a labyrinthine series of conveyors.

All around, dead batteries are piled in special containers and there’s a strange, acidic tang in the air.

This scene may look a little like something from a Hieronymus Bosch triptych, but the machine is providing an important public service, as Tom Seward, Ecobat’s Commercial Director explained: “We get roughly a third of all domestic batteries from the UK through here.” That’s a lot of AAs to handle, hence the ‘Devourer’ munching away beneath us. It isn’t actually destroying the batteries, but automatically sorting them into different bins according to type and readying them for destruction in an environmentally safe manner. 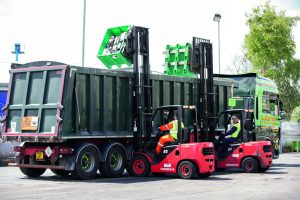 The problems occur when batteries are collected that have been left outside for weeks – usually at council-run rubbish dumps – having become bloated and taken on a furry texture. In this case, every piece has to be handled and identified by specially trained employees wearing the requisite PPE.

All of this interesting work costs a lot of money, with the tab being picked up by the battery industry. However, it isn’t the primary purpose of our visit today. The site deals with lots of these domestic batteries (which could be either alkaline or lithium hence the need for identification prior to recycling) as well as all types of industrial cells and, of course, automotive batteries. Seward and the team have invited us to look around the plant to raise awareness of both vehicle battery recycling and of the company itself, which we are pleased to do as global brand Ecobat can justifiably claim to be the world’s largest producer of lead, with around 840,000 tonnes manufactured each year. The firm has a global reach, but a few years ago it set about acquiring a number of battery-related businesses across Europe. Here in the UK it acquired distributor Manbat as well as waste collection firm G&P Batteries.

This means the firm can offer a ‘closed loop’ on traditional lead acid batteries, as it can deal with everything involved in the production, distribution, collection and recycling of the units. Seward also pointed out that everything can be recycled on a traditional starting battery, The only exception, ironically, is the sticky label with the battery info and recycling symbol on it.

However, there are two persistent problems, one minor and one major. The first small problem is that people continue to refer to the company by its old name, even though it has been years since the change. The second, far more serious problem is that of different battery types being mixed together prior to collection. “Take a look at this” Seward said, while opening a cabinet and taking out what appeared to be a regular scrap car battery, albeit a little cleaner than the rest of the battered scrap units at the plant. “Yes, it looks the same as a regular lead acid battery, but if you look closely, you’ll see that the label says it’s lithium iron.” It turns out that this battery had been OE on a McLaren which used a lithium battery as standard. The unit had been thrown into the same collection bin as all the other batteries, and it was only noticed by an eagle-eyed operator who pulled it out of the batch. “Batteries can be fairly safe and benign, but can also be very highly volatile, particularly if the risks aren’t known or they are ignored,” cautioned Seward. If it had been broken with the rest of the lead acid batteries, Seward explained to us, at best there would have been an explosion and a fire, but there would also likely be highly toxic gas released, putting the lives of everyone at the plant at risk. Fortunately lithium starting batteries are rare, but we can’t help but wonder why there isn’t an ISO standard mandating that the case be a distinctive colour.

The firm makes around 71,000 collections throughout the year so it’s perhaps no wonder that batteries occasionally get put into the wrong bin by clients, who are after all, throwing them away. To guard against fires breaking out, the facility has been designed with plenty of concrete bulkheads, and features specially designed racking and bins, so if there is a problem it can be dealt with quickly and easily. There are lots of safety measures enforced throughout the site, ranging from the obvious fire protection equipment through to vehicles all being parked facing in the same direction in case it is necessary to evacuate quickly. 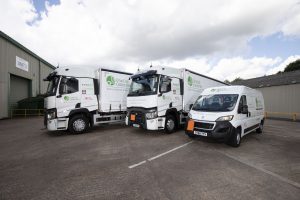 A new facility to remove traction batteries from electric vehicles is being built on site. Seward said it’s straightforward to remove power packs from end-of-life vehicles, but crash-damaged machines present their own risks, and require highly specialised knowledge, equipment and facilities to tear down safely.

As always, safety and awareness of the risks are paramount. “I’ve been in the business for fourteen years. This is a high-risk industry that we’re in. It isn’t about ticking boxes for health and safety,” Seward concluded.

CAT CONVERSATIONS: GETTING BACK TO GROWTH

CAT CONVERSATIONS: WE NEED TO TALK ABOUT BREXIT