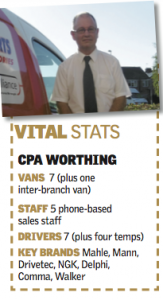 Today is a busy day at CPA Worthing, though to be fair it is always busy at the original branch of the twelve-strong chain.

However, the extra rucus today is caused by the installation of a new IP-based phone system. As we arrive, Nick Fulford from the Parts Alliance’s IT team is busy testing connections and setting up screens, which when up and running, will display info on ring time, missed calls etcetera.

CPA Worthing was originally setup by Nick Best and Keith Anderson. A number of other names familiar to the aftermarket also joined the company in due course, including Operations Manager John Austin who remains with the company to this day. However, it is General Manager Steve Reeves who we are meeting today.

SYSTEM
“We’ve got a great system going in, backed up with mobiles so we are not going to miss any calls” said Reeves, indicating to Fulford who has his hands full testing several new handsets. “We’ve accepted it with open arms” he said, adding that as one of the larger branches in the Parts Alliance network.

The original name of the business is Car Parts and Accessories, so it should perhaps come as no surprise that the customer area resembles a traditional accessory shop, albeit one inside an industrial unit. Around half of the room is taken up with an L-shaped CPA team on new phones counter that on our visit had five staff members variously serving walk-in customers and picking up the soon-to-be- replaced phones.

“The way and the speed that you pick up the phone is important” stresses Reeves. Telephone policy is something that is strictly enforced at CPA as it remains the main way that customers form their impression of a business. “The garages want to know that they are dealing with people they can trust – with my guys they can” he adds.

The main stockroom is large – although no-one is quite sure exactly how big. What we do know is that it boasts a large mezzanine for the slower moving items and has a room used for meetings and as an office.

EXHAUSTS
Down in the main stock area, we notice a large amount of floor space was dedicated to exhausts. “Exhausts will become a shrinking market” asserts Reeves. “With the the exhausts you’ll find that some parts don’t move for three, four or even five years. It’s ugly as well. There may be a plan to shrink some of our exhaust stock as there are specialist centres. If Joe Public wants a rear box, we can obtain one of those on the same day from a supplier. Long have gone the days when a third of a building this size would be exhausts. You’re hanging up fresh air and I want the space for other products”.

As with any branch in this buying group’s network, there are all the brands you might expect: Delphi, Denso, NGK and so on. We also noticed some Yuasa batteries stocked alongside the group’s usual range of Banner products as well as Comma Oil held in various grades and quantities. A team of three people picks the stock, with seven vans running in and around the surrounding area. There is also an inter-branch ‘tea van’ to keep stock balanced across CPA. “Getting stock to customers quickly is like a hot pizza because delivering a cold one is not going to be any good” he concludes.

With a focused team and the new business systems to help keep the business on track, we are sure that CPA will be delivering ‘hot pizzas’ for many years to come.