NEW ROLES AT LKQ/ECP, TARGET FOR 200 UK BRANCHES AND $5+ BILLION REVENUE ACROSS EUROPE 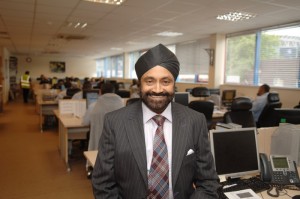 Martin Gray, who joined ECP in 2008 as People Director, has also been promoted to Chief Executive Officer of Euro Car Parts to allow Ahluwalia to devote more time to Europe.

While many in the industry thought Ahluwalia would exit the business once he’d had his payday, his thoughts have instead turned to the next ten years with responsibility for all of LKQ Europe’s companies ECP, Sator, Autoclimate and LKQ Coatings.

“I have never been more hungry, excited or determined to maximise our potential for the next decade and beyond. The UK alone will have 200 Euro Car Parts branches within three years and we have ambitious targets for paint, collision parts and e-commerce.

“My vision is to develop a group of European aftermarket companies exceeding $5 billion in annualised revenue within five years. This multi-channel business will create around 4,000 new jobs, with huge opportunities for career progression, particularly in terms of new management positions.

“As I devote time to the wider European picture, Martin Gray will step up into the position of CEO of Euro Car Parts, working with me to ensure that the core UK business continues to run in true Euro Car Parts style.  Our senior management board will remain in place to support Martin and myself.”

Gray joined ECP in 2008 from The Caudwell Group of Companies, which includes Phones4U, and said: “I am excited and honoured to be appointed CEO of one of the UK’s fastest-growing and most dynamic companies.”

“I look forward to overseeing the opening of many more Euro Car Parts branches, recruiting thousands more people with the Euro Car Parts DNA and achieving annual sales of £1 billion.”

“As always, our overriding objective is to provide an exceptional service to our loyal trade customers, the many thousands of independent garages across the UK.”

He said: “Having worked closely with Sukhpal for the past two years, I am constantly amazed by his encyclopedic knowledge of the European aftermarket. Simply there is no one better qualified to lead our European initiative.

“He has played a vital role in defining our vision for Europe, so I am genuinely thrilled of his new appointment and of his role as Advisor to the LKQ Corporation board.”