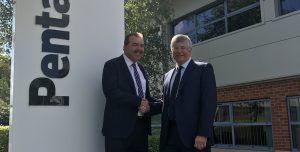 South Africa-based Imperial Holdings Limited has acquired dealer group Pentagon. The buyout was made through Imperial’s Motus subsidiary though terms have not been announced.

Pentagon, established in 1991 by its current Chairman, Trevor Reeve, has grown steadily from an initial Vauxhall franchise base to represent leading car and van manufacturers, Peugeot, Seat, Mazda, Citroen, Kia, Renault, Nissan, Fiat, Alfa Romeo, Jeep and Mitsubishi. The group employs 1,262 people, 46% of those have been with the business for 5 years or more.

Existing management will remain throughout Penatgon ‘for a transitional period’ to ensure integration with Imperial’s existing vehicle business. The Pentagon name will remain.

Commenting on the transaction, Mark Lamberti, Group Chief Executive Officer of Imperial said, “We are delighted to expand our international retail footprint into the passenger and light commercial vehicle market in the UK through the acquisition of Pentagon.”

Imperial Holdings Limited is not to be confused with the similarly-named Imperial Automotive Limited.