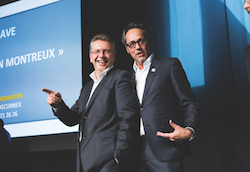 at the Nexus Business Forum held in Montreux, Switzerland in February.

The Nexus organisation was founded a couple of years ago by 14 European car part distributors, including the UK’s Parts Alliance. Describing itself as a ‘value focussed alliance of aftermarket leaders’ it has already achieved a total consolidated turnover of €7.25 billion in 2015 and has plans to extend this to €9 billon by the end of the next accounting period.

With sums of money this large floating about, it is perhaps no wonder that suppliers were only to keen to get a plane to the magnificent Montreux Palace hotel to engage in complex ‘speed-dating’-style sessions with the buyers. The event left plenty of time for less pressured networking and discussions as well.

In addition to the business meetings a plenary session was held to discuss the nature of the aftermarket including threats and opportunities that would likely happen over the coming months.

The event was well attended by many well-known aftermarket faces. We spotted Peter Sephton and Stan West of The Parts Alliance and GSF respectively, while on the supply side we met Laurence Bleasdale of TMD Friction, Nigel Cole from Denso and Andreas Habeck from Hella among many others.

We were particularly interested to note that an Iranian company, Alborz Yadak Trading, were among the companies competing for the attention of the buying groups. Iran has had a large manufacturing base for decades, but has been unable to trade with Western companies for years due to sanctions. Now diplomatic relations are open again, it will be interesting to see how products from the country are received into the aftermarket over the coming years.

There was also a panel discussion on the threats and opportunities that the connected car can bring.

Gael Escribe, Chief Exec at Nexus described how the reach of the organisation was to cover parts trading over the whole world. “Our vision is for one aftermarket and for Nexus to be a leader and not just a challenger” he said, reminding the audience that since foundation the organisation had achieved 59 supplier contracts and that places such as China that have traditionally been thought of as simply places where parts are made are now starting to consume components from around the world for their domestic parc.

CAT CONVERSATIONS: GETTING BACK TO GROWTH

CAT CONVERSATIONS: WE NEED TO TALK ABOUT BREXIT