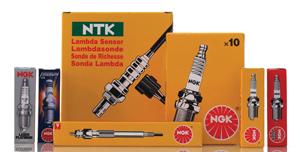 NGK has re-launched its garage loyalty scheme at Equip Auto and confirmed new partners Mann and Hummel Filters and Philips will be part of the programme in France.

An evolution of the original UK campaign, workshops can now return packaging from the three brands in exchange for better rewards.

The scheme has been rolled out to 4000 garages in France and if successful could be extended across Europe and the UK.

Xavier Pesca, Director of Marketing and Communications for NGK, explained it was now easier to collect points and spend them through the revamped website.

He said the goal was to provide each of the brands with a compelling message for garages while maintaining their individuality at the same time: “The real idea was to create a synergy.  Everybody stays independent, but everybody joins in with the loyalty programme which makes the whole experience more pleasurable.”

Mathieu Romet, Trade Marketing for France and EMEA at Philips, said: “This means technicians will be able to use different kind of spare parts through the same programme. We are not competitors so it is a win-win situation for the garages and us.”

The loyalty programme has only been available to garages for seven days and already there has been a lot of interest.

“What I have seen so far is a lot of positive reactions from garages”, explained Pesca. “The introduction has only been through the website so far. It was an unexpected result.”