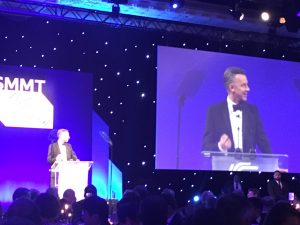 The Chief Executive of SMMT has spoken candidly about the issues facing the motor industry as Britain negotiates its exit from the European Union.

“Leaving is not what we wanted. For us, Brexit is about damage limitation. There is no ‘Brexit dividend’” Mike Hawes told an audience at the Society’s annual dinner on Tuesday night.

Pressing the need for parliament to pass the draft proposal bill, he said: We need a deal – now. And that deal must be ambitious for the future. We need frictionless trade with our most important market. Nothing less will do”.

Pressing home the message, he added. “This industry has always had political support – here and across the EU. Now, more than ever, we need that support. To avoid catastrophe; to give us breathing space, to deliver a competitive future. It’s time to decide”.

Business secretary Greg Clarke also addressed the room, and gave his support for the Prime Minister’s plans. “I remember being on the phone to Mike (Hawes)’s team for data on the way to Chequers and presenting it, and then on the phone to his team again the next morning to discuss what we agreed. It was central to the clear and unflinching objective that we set to secure frictionless trade on which this industry absolutely depends” he said.