Accessory brand creator and renowned Rallycross driver Keith Ripp has died at the age of 73.

Ripp started from humble beginnings, attending a secondary modern school in Enfield where he acted up and left with no qualifications aged 15. “I regret not being academic. But when you’re at school, you don’t care. It’s different when you join the real world though” he once said in an interview. 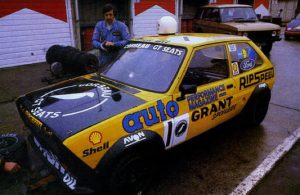 Once out in the ‘real world’ Ripp realised that the only person he wanted to work for was himself. Initially he trained as an electrician, but having discovered the joy of driving Rallycross in a Mini, he realised there was a gap in the market to specialise in selling tuning parts and accessories to people preparing cars for the track and ‘boy racers’ alike.

The first shop opened in Waltham Cross in the early 1970s. With money tight, Ripp couldn’t afford much stock, so tricks like filling displays with empty cartons and even removing parts from his own race car to make up the weekday window display were common. However, the business was a success and in a few years three branches orbiting London were opened, which were later consolidated into one purpose-built superstore in Edmonton.

Ripp was one of the first accessory shop owners to see the potential of upgraded in-car audio, and sold imported amplifiers and subwoofer boxes alongside the ranges of engine tuning and dress-up kit. Stocks of Mini parts began to be wound down in the late 1980s (a decision Ripp said he later regretted as the Cooper was re-introduced a short time later) and the firm instead specialised in tuning parts for Mercedes.

However, racing took a physical toll on Ripp. After crushing his spine in a bad crash at Brands Hatch, he decided to retire, describing himself in a later interview as a ‘walking wreck’. Further ailments connected to a heart condition, which eventually required a triple bypass, lead hime to sell the business in 1994 to Halfords, which still own and market the Ripspeed brand to this day.