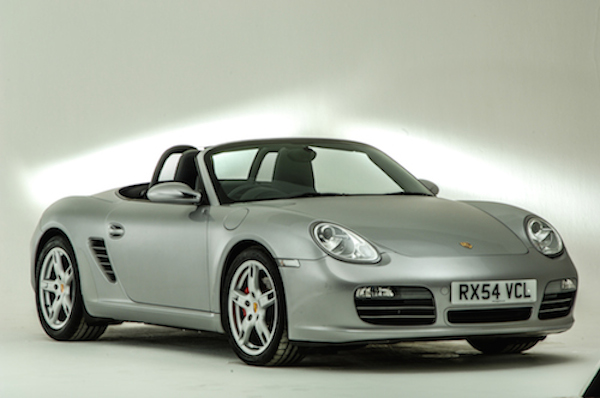 The Porsche Boxster is the latest car to get the once over on our ramp.

Originally launched in 1996 the 986 was styled on the 550 Spyder, before in 2005, the model was replaced by the 987 in 2005 and was in production until 2012. The second generation Boxster took the roadster concept and improved it both cosmetically and mechanically. It eventually became the basis on which the much-coveted Cayman was then spawned.

These Boxsters were fitted with a five- or six-speed manual or a PDK automatic and a complex folding roof, which will provide some extra challenges.

Forum 986forum.com says that the early Boxsters were known for their seatbelt buckles not being grounded properly and causing the airbag warning light to activate. Most have been replaced, but the problem is said to be a reoccuring one.

iwantaporsche.net says that it is natural for the Boxster to produce a puff of smoke on start up, if the car has been sitting around for a few days or more. This is due to oil accumulating on the piston rings due to the construction of the boxer engine. As a result it advises technicians to tell customers to keep an eye on their oil level between services.

Autofarm says that electric roofs on the Boxster are complex and very expensive to repair. So it advises to clear drain holes regularly, otherwise the excess water will run down the rear bulkhead and flood the electrics. This can cause minor operating niggles with the roof, windows and the central locking or cause more permanent damage to the ECUs which are located under the driver’s seat.

Rotating electrics remanufacturer Autoelectro advises technicians to be wary when replacing these parts on the Boxster. It explains that the 1999-2004 986 version uses a variation of starter motors for its manual and automatic, and 2.5-, 2.7- and 3.2-litre Boxsters. Although the units look similar the differences lie with the power output, with the manual starter motors rated at 1.1kW, while the automatics use 1.7kW or 1.8kW units.

While it adds that Boxsters made in 2006 came with two alternator variants. One operates on a warning light system, while the other was ECU-controlled. In both instances fitting the wrong type of rotating electric will cause the new unit to prematurely fail.

Independent Porsche specialist Autofarm says that the early versions of the 2.5-litre Boxster suffered from a porous block. It adds that many have been rectified under warranty, but there may still be some out there.

986forum.com says that Boxsters built between mid-98 through to early-99 suffered slipped sleeves in the engine causing total failure. Again most vehicles built between these date ranges would of had their engine replaced under warranty, but there may be some still out there.

Autofarm says that the a more serious problem that affects the water-cooled M96 engine found in the first generation Boxster is with its intermediate shaft bearing prematurely failing. It adds that there are no tell-tale signs of failure, but you may spot traces of oil in the bellhousing or metal flakes in the oil filter.

Forum 986forum.com says that this problem is indiscrimanate, with some engines over 100,000 miles still working with its original bearing. It adds that there may be a grinding noise prior to failure of the bearing, but in some cases it can happen unexpectedly.

Autofarm warns that failure of the bearing can be catastrophic, leaving many a Boxster facing the breaker’s yard. However, if the failure happens at low speed, then the valves are likely to be bent, leaving the Boxster’s engine repairable.

986forums.com adds that the Boxster is also prone to a D-shape piece fracturing off when the sleeve slips in the cylinder. This damage is thought to be caused by not allowing the Porsche to warm up thoroughly before moving off.

986forums.com mentions that the Boxster is susceptible to rear main seal failure, through the means of dripping oil. The problem is said to originate from the poorly designed seals on the crankshaft and supporting structure. The issue is said to affect manual Boxsters more than its automatic variants.

The rubber in the engine mounts on the Porsche Boxster are known to deterioate says 986forums.com The symptoms include hearing a clunk when changing gear or struggling to move the lever.

Worn Down By Suspense

The RMI says that the Porsche Boxster suffers from a couple of common suspension problems, such as worn suspension bushes, which can lead to excessive wear of the Porsche’s tyres. While it adds that the front suspension springs are known to break after being put on wheel free lift.

A Tear In My Porsche’s Boots

Both Porsche forums 986forum.com and iwantaporsche.net say that the CV boots on the Boxster are known to breakdown and fail on the six-speed versions. The boots are well known to rip frequently allowing dirt and water to penetrate the bearings, and causing it to prematurely fail. It advises to check the CV boots regularly on these Boxsters, although five-speed manuals and automatics don’t seem to be affected quite as much.

Forum 986forum.com says that the Boxster’s battery is locked in the trunk at the front, and warns that access can be tricky if the battery is flat. There is often not enough voltage to power the motor that releases the catch to get access to the battery. There are ways to jump the battery and releasing the boot mechanically.

The 3.2 litre engine in the Porsche Boxster 987S can suffer from catalytic converter problems, signified by a fault code being stored for catalyst efficiency below threshold say Forté. The firm produces a range of additives than can help clear the problems.

Comma says that most 986 and 987 Boxsters will use 5W40 engine oil to lubricate its range of powerplants. It adds that with the Porsche’s service interval every 18,500 miles, it is advisable to mention to motorists to regularly check their vehicle’s oil to protect sensitive components and a good opportunity to sell top-up packs as well.

Next month we’ll be looking at the Rolls-Royce Silver Spirit, so wherever you work in the aftermarket if you have insight to share, we would be delighted to hear from you.