PUTTING A STOP TO BRAKE DUST 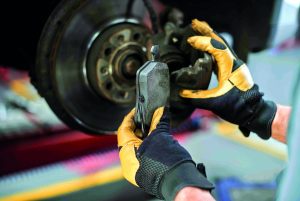 The knives have been out for traveling by car recently. All around the nation, there have been scores of column inches devoted to the harm that small particulate matter does to our bodies – and if you live around London, you have probably seen some of the anti-car campaigns being run by the Mayor’s office as a new wave of legislation dictating what vehicles can be driven and when take effect.

It isn’t just smokey exhausts that have caught the attention of the powers that be. A cross-party committee called the Air Quality Expert Group has identified that tyres, roads and perhaps most notably, the dust from brake linings are a source of very small particulates which can cause problems with breathing and can also enter the water table easily when rain washes the dust from the road.

Scale of the issue

In one sense the problem is unlikely to be growing as hybrid and electric vehicles use regenerative braking, so the amount of wear on the pads is greatly reduced. However, as the amount of particulates from exhausts reduces, pollution from brake and tyre wear will increase as a percentage, with DEfRA predicting that 10 percent of transport emissions will be from these sources by 2030. In Germany alone it has been calculated that 10,000 tonnes of brake dust is scattered annually.

It might be easy to dismiss this issue as just rhetoric, but cases of lung diseases and asthma are on the rise and there is good evidence that it is the smaller particles, rather than the bigger sooty ones, that cause the most damage to the organs of the body.

So, what can be done? We asked a number of the 60 or so friction lining brands if they are taking any action on the issue.

Scott Irwin, Technical Trainer at TMD Friction, the company behind brands such as Mintex, Textar and Pagid, said: “With regards to pollution through tyres and brakes overall, there are currently no official limits or common methods of measurement. It is much more difficult to provide these guidelines than it was for emissions from exhaust pipes because brakes are open systems”.

He added that his company has around 800 materials to choose from. “Our raw material portfolio management team proactively researches and tests suitable new raw materials that are not harmful to people or the environment when processed or when used in the brake system,” he said, adding that TMD is a member of the UN’s Particle Measurement Programme which is dedicated to address the issues of non-exhaust related emissions from vehicles. 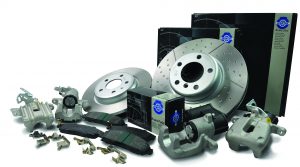 Most people know that asbestos was used in making brake pads and shoes until it was, quite sensibly, banned from use donkey’s years ago. Perhaps less well known is the use of copper wire to make the friction material bind together. Copper isn’t in itself harmful, but when ground into a fine power, the metal can get into the bloodstream where it is toxic.

Copper is being phased out, and some companies have already removed it entirely from friction linings. However, others have kept it in the mixture and will do so until required to do so by law.

Matt Leeming a Manager at aftermarket braking brand Juratec noted that his company had discontinued use of copper and other heavy metals some time ago, but the problem is spread wider: “Of course, governments are looking to go further than just restricting the use of some of the more problematic ingredients of brake pads. It has been established that this wear debris, or particulate matter, which is a mixture of both pad and disc debris ranging in particle size from under 100 micrometres to approx. 0.1 micrometres, with some of it falling in the critical respirable range of 10 to one micrometres” he said.

By comparison, a human hair typically has a width of about 50 micrometres.

“To reduce particle emissions further will require a much broader approach across a number of fronts so we are seeing special hard coatings being applied to the surface of brake discs to reduce their wear rates and of course carbon-ceramic discs offer reduced wear albeit at a significantly higher cost” Leeming furthered. “The automotive industry is also exploring partially enclosing brakes and fitting them with filters in order to capture the bulk of particulate emissions so the likely final outcome will be a combination of measures”.

The filters referred to by Leeming are being developed by companies including Mann+Hummel based in Germany. The firm recently exhibited a working model of a brake dust filter, which featured in the firm’s company magazine. For the filter media the engineers opted for a metallic based web. The fibers are resistant to corrosion and are able to withstand the high temperatures on the brake. Several German magazines have also shown pictures of the filter, built on as part of the brake mechanism, being tested on various new VWs, suggesting that VMs might include the design on new vehicles in the near future.

Some firms are further down the road of removing metal from brake pads than others. A few we spoke to would only say that the binding agent would be removed ‘when the time comes’, i.e when required to do so by legislation and herein lies the problem of cleaning up the mixture used in brake linings.

There is scope for development, but with so many brands fighting for space on the factor’s racking, there needs to be rules and clearly repeatable tests introduced that everyone must follow.

Trains a problem too 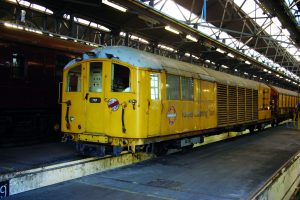 Don’t think that simply avoiding cars and taking the tube will be an answer to keeping clear of brake dust particulates. Filter brand Mann+Hummel has reported that longer visits to underground railway stations can also be harmful to health. Measurements in the London underground system, for example, have registered air pollution with inhalable particles in the range of 500 to 1,120mg per cubic metre, which compared to the EU’s guideline of 50mg is off the scale. A tunnel cleaning train used to be in service, but it was withdrawn and plans for a replacement were quietly dropped.