Note: CAT is stuck indoors for a while, so we’re revisiting some of our favourite site visits from the past couple of years. This one is from Jan 2020.

There’s a new broom sweeping through Rotherham retail outlet Leisureways – both literally and metaphorically – as new owner David Clarke is having a clearout.

When we arrived to have a look around, a large stock cleanse was in its final stages. Already, lots of old references had been packed up and sent back to suppliers. As we toured the stockroom, which was busy undergoing a complete reprofile, Clarke said: “One rep who came in today said: ‘David, the value of this stock is exactly nothing but as a gesture of goodwill we’ll give you £250.’”

“Everyone who has been here has seen what is potentially a very good customer,” he added, noting that so far he’d had nothing but support and goodwill from the various suppliers who have presumably sensed that the 60 year old family business has been given a rare opportunity for growth. 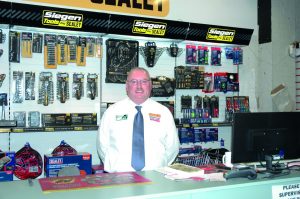 Previously a member of the A1 Motor Stores group, the shop is now part of UAN, along with the rest of David Clarke’s Chesterfield-based Autosupplies Group. However, he has been careful not to throw the baby out with the bathwater, acknowledging that local affection for certain brands is very strong. “I’ve been learning here as well” he said.

“I was just about to get rid of Millers Oils when the lad rang up with £700 worth of orders. He came and saw me in Chesterfield where I told him that I owed him an apology for nearly booting his stock out! I’ve done a U-turn and now you’ll see a lot of Millers’ stock in here,” Clarke declared.

As with many family businesses, Leisureways in Rotherham can trace its roots through multiple businesses operating under different names and over various sites across the decades. Originally called Rotherham Rebore, the business was later expanded to offer car parts for the trade and the DIY motorist, as well as a range of camping and sporting goods (hence the name Leisureways).

As legend has it, a very young Seb Coe is said to have bought his first pair of trainers at Leisureways, and to have been so impressed with the service that he agreed to open a bright and airy new showroom for the firm shortly after breaking the world 800m record in 1981. 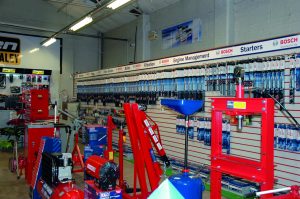 The current site was developed from an old BT building in the 1990s and sits on a plot we estimate to be around 40,000 sq ft, though various tennant businesses, including a garage, a takeaway and a therapy room, are based on the same site.

Through all the changes, the Hinchcliffe family has remained an integral part of the operation. Brothers Ron and Trevor Hinchcliffe have been at the helm for decades, with various family members helping them along the way. So it’s only natural that when the time came for them to retire and sell up, they were keen for the business to continue running, rather than see the site being snapped up by a developer.

Which is where David Clarke, owner of Chesterfield-based Autosupplies Group came in. In point of fact he had been working behind the scenes with the Hinchcliffes for over a year before the deeds were finally exchanged. Even on the day of our visit, which was a week or so after the deal had been completed, both Hinchcliffe brothers were on site to assist with the handover.

But just because there is bonhomie with the previous management doesn’t mean it’s business as usual at the retailer. As someone who has spent his working life selling hard parts and body shop consumables to the trade, Clarke saw little future in trying to sell fringe products like running shoes and squash racquets to the public. Instead, his plan is to drastically improve the firm’s trade factor proposition.

“At the moment, turnover is around 90 percent retail and ten percent trade,” he said. “In 18 months’ time I expect those numbers to be turned around.” That doesn’t mean that the firm is going to reduce its retail space; the recent addition of several new stock lines and the replacement of the sports gear with displays of Bosch goods and Sealey tools suggests the opposite is true. 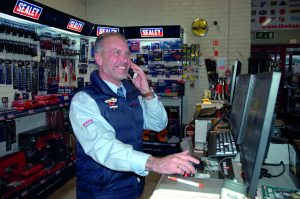 Rather, a radical overhaul of the firm’s offering to garages is currently underway. Once new racking is installed (some of which was being brought in as we spoke) and filled with new stock, the push to all garages in the triangle between Rotherham, Sheffield and Barnsley can begin. A room currently used as a sort of computer graveyard has been earmarked as a dedicated call centre and Clarke’s project manager Allan Dannatt is on site to help get things running smoothly. The number of vans operating out of the branch has already been increased from one to three, and when we mention that a building of the size could run, say 15 vans, Clarke said without hesitation: “Yes, I think that’s about right.”

The site will go some way to helping Autosupplies achieve its goal of covering South Yorkshire, but no-one is saying it will be easy. ECP are highly active in this region, as is rival independent chain Bullseye.

Still, a combination of a known and trusted local brand mixed with Clarke’s shrewd business sense and desire to succeed? We wouldn’t bet against them.