by Posted byCAT
24 September 2009
Remanufacturing is interesting. Now there’s a sentence I never thought I would write, say, utter, whisper or even think. 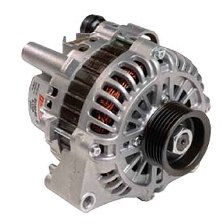 But it is – genuinely! – interesting.

I say this following a meetingÂ and lengthy lunch with one of the world’s leading experts in remanufacturing, Michael Flensborg, of Remy Automotive UK.

I enjoy lunching with CAT’s clients. This is especially the case when you get on with them and have a good time, talking about stuff in addition to pure business. Editor Emma ButcherÂ and I both felt that we ‘clicked’ with Michael, and his marketing manager, Maureen Cole.

ItÂ was obvious from the outset that both are passionate about their area of the industry. So much so that,Â in Michael’s case, he commutes every week from his home in Malmo, Sweden, to Remy HQ in Lichfield.

Or maybe not… Closer questioning revealed that it only takes him an hour longer to get to work door-to-door on a Monday morningÂ from Malmo than it takes Emma Butcher to get to the CAT office in Teddington from her home in Shooters Hill.

Which is more crazy?

Both Michael and Maureen also know their stuff inside out. By the end of lunch, I knew all about ‘core’, the remanufacture process, about Remy’s factories in Hungary and Tunisia, and how OE quality can be achieved through remanufacture.

I also learned that doing aftermarket Â business in Russia is problematic for Remy.

This is because the old Ruskies won’t send their used alternators backÂ  (incidentally, don’t botherÂ typing the words ‘Russia’ and ‘remanufacture’ intoÂ Google. Instead of alternators and starter motors, you get pages about warhead remanufacture, nuclear terrorism and various other horrors)!

On a lighter note, I discovered too how Maureen’s husband has a penchant for Girls AloudÂ following a trip to Wembley to see them live, supporting Coldplay. Me too!

My fave is Nadine, with Cheryl coming in a close second. I didn’t ask Maureen which girl her hubby liked best, thought it best not to.
Â

As lunch progressed, Michael revealed that Remy International Inc is also leading the way when it comes to manufacture and supply of OE and OE-quality parts for hybrid cars, specifically hybrid electric motors.

In the US, Remy has even been awarded a government grant to ‘establish a standardized platform of hybrid electric motors and controls’.

While we’re not seeing too many hybrids enter the UK aftermarket as yet, you can be guaranteed that they will be getting onto garage forecourts in the next few years in more and more numbers.

But the beauty of the aftermarket is how it adapts to changes like this. We have seen it over years gone by, we’ll see it again.

We are working in one of the most durable and innovative industries there is. People need to think ahead to survive.

Remy is a company doing just that: as hybridisation and green motoring become more prominent, so will the name Remy.

I’m looking forward to working with Remy in the near future. It’s a company going places. And remanufacturing, hey? Who would have thought I would have enjoyed talking about it so much!