ReMaTec reflects the positive mood in the reman industry 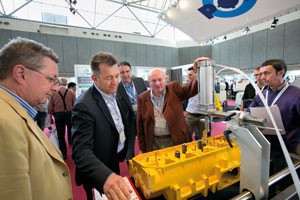 A positive vibe was felt as the international remanufacturing industry gathered in Amsterdam for the 2015 edition of ReMaTec.

Niels Klarenbeek, ReMaTec Shows and Publications Manager, said: “We’re very happy with the large number of new exhibitors joining the show. It’s a clear indication that our market is growing and of the potential as remanufacturing as an industry.”

The show also focused heavily on education, and launched its InnovationLAB, which showcased the latest techniques in the industry, while the events programme also included the World Remanufacturing Summit, International Conference on Remanufacturing and a Circular Economy Seminar.

Paul Bliek, Marketing Project Leader at ZF Services, said: “We also use the show to build relationships in the reman industry as well as maintaining existing ones, and to start a dialogue regarding any future requests and business within the service and reman industries.”

The show was also the stage at which the Remanufacturer of the Year was named as Borg Automotive picked up the award. ReMaTec will return to Amsterdam in 2017, the organisers already confirming that half of the exhibitors have booked a stand for the next edition.