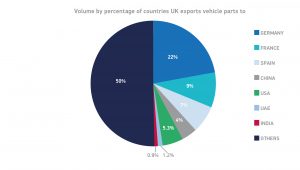 A report has been published identifying a £195 million opportunity for UK aftermarket firms to expand in three major emerging markets, as demand grows across the world.

The UK automotive aftermarket is thriving, ranking fourth in Europe and ninth in the world in terms of size, and turning over an annual £21.1 billion, according to the report. The sector supports 345,600 jobs and contributes £12.2 billion each year to the economy. And it is growing: in line with the UK’s increasing car parc, the sector’s value is set to rise to £28 billion by 2022.1 The UK also enjoys robust trade with other European countries, with Germany its largest market, followed by France and Spain. In fact, Germany purchases more components and accessories from UK-based parts suppliers than it does from any other country.

However, an SMMT Frost & Sullivan report shows that international markets and in particular emerging markets, offer the biggest potential for growth. International Opportunities for UK Aftermarket Companies shows that suppliers exporting to these regions can grow their businesses at rates four to five times higher than the annual 3% they can expect in the UK. The total global opportunity stands at some £500 billion for aftermarket business.

The report explores the potential for growth in three key emerging markets: China, India and the GCC region of the Middle East.2 Together, these three aftermarkets are worth some £54 billion – so the potential for growth is significant. Just by keeping pace with these markets’ natural growth, UK aftermarket companies could double their income to £195 million over the next seven years.

The UK automotive aftermarket sector is part of an industry which relies heavily on the tariff-free flow of goods across borders, with component sub-assemblies often sourced from a diverse range of countries. Further growth into new markets would benefit from new trade agreements, but that should not give reason for delay.

Mike Hawes, Chief Executive, SMMT, said, “The UK’s aftermarket sector is one of the world’s most dynamic and the record attendance at Automechanika Frankfurt demonstrates the sector’s success and global ambition. To help companies exploit these opportunities, government must secure the competitive conditions that have allowed this export-led industry to thrive. This means tariff-free trade with our partners across Europe and further trade deals with emerging markets.”