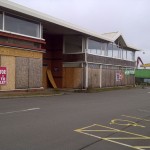 That’s the verdict of a new report from the Centre for Retail Research (CRR) which says 316,000 people could also lose their jobs if the decline of high street is left unchecked.

“The UK is facing a crisis. Radical changes need to be made by retailers, town centres and the government to preserve what is best in retailing.

The CRR report identifies 153 town centres, 41% of the total, which are set to experience a rapid decline unless action is taken.

“Retail Futures 2018 recommends that a pump-priming fund of £320 million is required to start redeveloping these problem town centres to turn failing and empty shops into other facilities for which there may be a local demand.”

It also means retail chains with strong websites now need 70 high street stores to create a national presence, says the CRR, compared with 250 in the mid-2000s.

While local neighborhood stores are likely to be hardest hit, with a predicted decline of 26.2%, the CRR reckons that 164 major or medium-sized companies will go into administration over the five-year period.

Major retailers like Tesco, Asda and B&Q are also not immune, it says, noting the reduction in the number of large stores being opened and plans to sub-divide others and lease space to other retailers.