RISING AGAIN AFTER THE FLOOD

Keeping afloat after disaster strikes takes the most Streetwize of operators

This article originally appeared in CAT in April 2017

Regular readers will have seen Murray Silverman and his team in the magazine many times through the years – first through his activities as the Ace Supply buyer’s agent and more recently through accessory brand Streetwize.

However, in the last days of 2014 the business nearly went under – quite literally as the warehouse and offices suffered a devastating flood.

“It happened on Boxing Day, and when I got back from holiday I saw the flood” recalled Silverman with typical understatement. A video clip on his phone reveals that a river had burst its banks, putting the nearby houses and businesses under four feet of fast-flowing and extremely muddy water. This was going to take a while to sort out.

The first problem was to find somewhere to physically do the sorting out. The area, still under water, had been cordoned off by the fire service so Silverman had to come up with another plan. “We had nowhere to go, but there were some serviced offices over the road a little way, so I ran over and asked what they had”.

The answer was not much, but the manager of the building found a few rooms scattered between floors, which at least allowed Murray, son and co-director Dale, Co-Director Dave Davis, Julie Bell from the Purchasing team and a number of other sales employees to phone around customers to explain what had happened – a situation complicated by the fact that they were not able to use the Streetwize telephone system.

HEAD UNDER WATER
“Customers were very sympathetic at first, but after a couple of months it started to wear a bit thin” explained Silverman. One of the problems was that after the water receded Environmental Health looked at the condition of the building and decided that it was something more toxic than mud that caked every surface and large swathes could not be used. The result was that pretty much all of the stock was written off as well as a whole load of computer systems and physical paperwork destroyed.

One of the problems when your business is imports is not loosing the stock – painful as it might be, it is insured – but replacing it will take at least twelve weeks and in the modern age of retail, that just isn’t acceptable. “It was a total battle, plus we had no premises,” recalls Silverman. “But I couldn’t just turn on the tap”.

In the short term, the management had to beg, borrow and call in favours to get space to hold the small amounts of stock they could get their hands on. Not wanting to risk a repeat of the incident, the hunt was on for a new and permanent home – although that was also problematic as staff wouldn’t want to move too far.

The lack of stock was a massive problem though. “We had stock here, there and everywhere, and we were losing orders left right and centre” recalled Silverman. “Some of the national accounts fined us because we couldn’t fulfil the order and some of them cancelled altogether. You can argue with your insurance all you like, but once you’ve lost an order, you’ve lost it and they let someone else in”.

However, in the modern North-West decent logistics space is at a premium. Fortunately, and at the last minute, Silverman found a warehouse in Manchester and the race was on to get it racked out before a large shipment of stock arrived.

To say that the transition was straightforward would be inaccurate, however the current property offers a number of advantages over the old place – and not just because of the reduced flood risk. First of all, wide loading bays and the brand-new racking meant it was easier and quicker to move goods in and out. Secondly, brighter and roomier offices on site meant the sales and buying teams could get on with their work. Finally, the site had a large upstairs room that leant itself well to being set up as a mock accessory shop.

LOSING ORDERS
The race was on to refill the stock room and the order book – and this led the company in a new direction. For some time, Streetwize had offered a range of camping and leisure products, but now it was in a position to expand on this. “I had a customer that was into mail order that opened a door for me for a national account, who wanted garden products” explained Silverman. These were easily sourced from the firm’s list of factory contacts, as were a number of caravan products. “We went to the shows and added an electric caravan mover to range” he said. “I knew the maker of old, so I asked him about securing the UK rights and it has been big business for us”.

Leisure products, now sold under the sub-brand Leisurewize is now the fastest growing area of the company, though this hasn’t been without challenges. In a market that is dominated with the likes of Amazon and eBay, the firm has struggled with ‘substitute sellers’. Simply put, these sellers will use a picture of a Streetwize branded product, but actually send a generic unbranded item that the sellers have imported themselves. The team at Streetwize joined with other (mostly leisure) accessory distributors to have these sellers taken down – but it has been an uphill battle as the way that the nation buys and sells has changed. “I remember the days of Gordon Spice, Regor, G&M and Maccess – there were loads of cash and carry’s” said Silverman wistfully. “They’ve all gone now… The internet has changed the world” adding that the company has never supplied consumers directly and certainly hasn’t sold directly on Amazon.

EXPORT
Another new direction after the flood was to try exporting Streetwize branded products. “It was difficult, because no-one was waiting for Streetwize to turn up” admits Silverman. However, after going to a few trade shows he found buyers that were willing to listen to his message that while it might be easy to buy directly from China, it is much harder to buy consistently or well. For that you need long-established contacts as Streetwize has. “If they buy from us, they get the opportunity to buy good products with a strong brand” he says, adding that he loves sticking another pin in the map when he picks up a new international client.

A surprisingly strong market has been New Zealand and there is even an accessory shop on the tiny island of St Helena that is decked out with the firm’s wares.

On our visit, the peak season for wholesale buying leisure products was nearing an end, and the warehouse was full of water rollers, tow hitch locks, electric caravan movers and many other products that we weren’t familiar with. Dale Silverman and Dave Davis pop by to say hello, in between both of them sorting out complex deals on their permanently busy phones. The mock shop, which also doubles as a boardroom, is a fantastic size, but even this can’t display every product that the team imports.

Silverman started in the aftermarket by buying a job lot of ‘Grand Prix’ brand steering wheels that used an interchangeable boss to fit most cars on the road at the time. Today, the businesses’ fastest moving lines are various hands free accessories and dashcams, as well as the afore mentioned caravan mover. As Silverman says, the world has changed and so have the things people buy as well as the way in which they buy them, but you can be sure that the team from Manchester will be on the phone, constantly looking for the next big opportunity – whatever the weather throws at them.

NEW TO RANGE, ONCE APON A TIME:
Silverman’s thoughts on five great products from the last 30 years:

“These are essentially useless, but at one time we couldn’t stock enough of them” 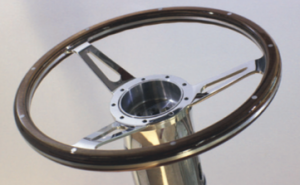 “We tried to sell them to the likes of Maccess, but they said: ‘No way! You are a thorn in our side!’”

“For a time, anything with Max Power on it would sell – absolutely anything. Funnily enough Fast and the Furious merchandise was a comparative disaster”.

“I realised there was a market for this, so we got the licence and straight away sold 50,000 keyrings to Asda”.

“I came back from Taiwan and told everybody about these. Without exception, they thought I was crazy…but I knew there was a market for them!”