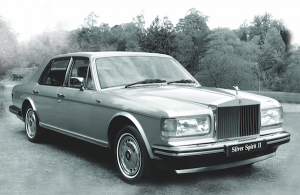 The Silver Spirit was fitted with Rolls-Royce’s 6.75-litre V8 engine with either a three or four-speed automatic gearbox, depending on the age of the vehicle. Throughout the various marks new complex technology was added to each Silver Spirit, with gas-charged shock absorbers fitted on the Mark I, while automatic ride control was introduced from the Mark II onwards.

The RMI says that issues with the automatic transmission is related to problems with the selection control unit. The gear position is electronic controlled by a transmission control position sensor transmitted by a wire. Higher mileage versions of the Rolls-Royce are the most likely to suffer from this issue.

Rolls-Royce and Bentley parts specialist Flying Spares says that when the rear springs on the Silver Spirit lose their pressure, the suspension goes solid leading to a harsh and bumpy ride. The fix is by replacing the rear gas springs, and garages will need to fit the spheres, run the car and check the mineral oil, after which the Silver Spirit will jack itself up and self-bleed.

The RMI says that the Rolls-Royce is prone to the electronic suspension ride control system or one or more of the suspension units failing, which is noticeable by noisy suspension. FPS adds that the heavy nature of the Silver Spirit and soft ride plays havoc with the suspension and shock absorbers. It says tell-tale signs include a soft bouncy ride, and that electronic ride control on early 1990 versions didn’t alleviate the problem.

BLOWING OUT ON FULL LOCK

Forum RollsRoyceForums.com says that the Silver Spirit has a ‘notorious’ history of problems with its steering rack, which is prone to premature failure, so much so that owners are advised to avoid going to full lock position even if there is no sign of tyre rubbing or clunking. It says that these racks when at full lock are known to suffer from the pressure maxing out and blowing the seals.

NOT AN OTTER ONE

Flying Spares warns that Rolls-Royce Silver Spirits that fail their emission tests due to overheating, will be linked to the black otter switches, which affects the functioning of the fans, clock, windowns, interior lighting and central locking. It suggests trying the otter reset switches located in the glove box.

RUNNING OUT OF BRAKES

The brakes on the Rolls-Royce Silver Spirit are prone to common problems. FPS says that it is common to get marks on the brake discs where the pad is in contact while the car is left standing for long periods. Eventually these marks will lead to brake judder, and it will lead to a four-to-six hour replacement job, with the rear brakes requring a specialist Rolls-Royce hub tool. The RMI says if the brake judder persists after the discs are replaced, this could be down to the soft suspension bushes exaggerating any minor disc runout.

FPS adds that clunks heard at the front of Rolls-Royces and Bentleys are linked to front shock bushings and compliance mounts. It adds that the job will take all-day and will require a special Rolls-Royce tool.

Flying Spares advises that Rolls-Royces and Bentleys built between 1988 and 1992 are prone to a whining noise being generated from the differentials. It adds that these sounds can affect any vehicle in this production period regardless of mileage covered, and could mean either replacing the differential or requesting the owner puts up with it.

Flying Spares says that if the fuel gauge fails, the way to access and replace the fuel tank sender is via the boot facing panel, which is a drop down screw or plastic clip depending on the age of
the vehicle.

PUMPING UP THE VIBE

RollsRoyceForums.com says that a whine from behind the rear tyre is linked to the fuel pump, and when jacked up it will become apparent quickly whether the pump is vibrating.

FPS advises technicians to be wary of the Rolls-Royce Silver Spirit’s pressure regulation systems, referred to BRAKE 1 and BRAKE 2, both with their own sensors. On start up the lights should go out after 30 seconds and if they don’t the fault could be linked to a weak accumulator valve block.

Flying Spares says that earthing problems with cars built between 1988 and 1993 are common. The issue relates to the earthing strap between the driver’s side rear engine mount and the chassis leg. The remedy is simple, and involves cleaning the contacts, or alternatively adding a second strap to the nearside engine mount.

RollsRoyceForum.com says that owners complaining about their fob not unlocking their car, therefore having to use the key to unlock it. However, with the car self-locking itself unlocking the car again means the alarm goes off. This problem is linked to the battery leaking onto the alarm’s ECU PCB, which is known to cause the problem. This fault can affect the Silver Spirit and the Bentley Arnage.

Cambiare warns that the Rolls-Royce Silver Spirits are prone to hard starting and misfires under load due to a faulty ignition coil. While FPS adds that roughness on idle even with the air conditioning and accessories are turned off, and the car is fully warmed up, could be linked to clogged injectors or other engine management related issues.

Next month we’ll be looking at the Fiat 500, so wherever you work in the aftermarket and have some insight to share, we would be delighted to hear
from you.