VM-owned Ford dealer and garage network TrustFord is considering hiring ‘semi-skilled’ technicians to work on some of its vehicles to tackle a shortage of technicians and accelerate its apprenticeship scheme.

TrustFord CEO Stuart Foulds said in an interview with Motor Trader magazine that the company is ‘exploring the possibility of using semi-skilled staff’, because ‘a lot of the work can be done by semi-skilled’ as opposed to fully-qualified technicians.

The issue of training and retaining staff is familiar to some in the aftermarket. However, Peter Welch of Scotlands Ash Garage, who has discussed the issue in the past, is critical of TrustFord’s approach. “It would worry me because technology is getting more and more,” he said. “If they’re just changing oil and filters that’s a bit of a different thing, or fitting tyres or putting bulbs in. But if they’re doing proper servicing, well, perhaps main dealers don’t do much more than that.”

Foulds also mentioned in the interview how the group offers one-hour servicing without appointment, which is possible by having three technicians working on one car at the same time. 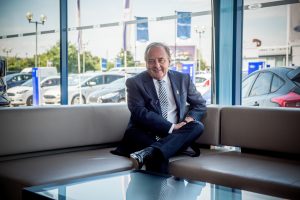