SERVING EVERYTHING THAT IS AUTOMOTIVE

We visit ‘Small Garage of the Year’ winner Simon Taylor 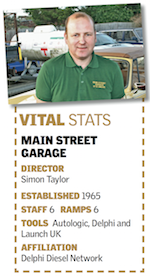 It’s fair to say Taylor’s winning streak has gone in his favour as when we arrived, there was a stream of customers and a logjam of cars waiting for attention on the forecourt. “We weren’t sure whether it was because of Brexit, or the economy or other reasons that we’ve been so busy”, said Taylor “But it seems to be lasting and we are getting more customers from further afield now”.

With a handful of garages and a Honda dealership operating in close proximity, we were curious to find out how this independent has ‘survived and thrived’ while others have been forced to roll down the shutters for good.

UNIQUE SELLING POINTS
While the garage is not selective and will operate on just about anything and everything that is automotive, there are a number of specialisms. For a start, it deals with LPG conversions and all that entails as well as having a skill set and a whole lot of diagnostic equipment for JLR products, and Land Rover in particular. Nonetheless, Taylor’s team will trace the fault on whatever is presented to them. “Although it would be nice to say that we specialise in specific vehicles, our customer base is completely varied. Generally, we work on Land Rovers, classics and even agricultural vehicles including tractors for our farmer customers”, says Taylor, adding that the workshop, on occasions, has taken on work from the Honda dealership who have also diversified its range to remain competitive in the area.

The experienced in-house technicians have played a major role in the garage’s success, according to Taylor, who are equipped with years of industry knowledge and expertise between them.

To complement their skill-set, Taylor makes sure his workforce are fully trained with the latest diagnostic tools and software on the market to speed up vehicle turnaround. “We are part of the Delphi Diesel Network and utilise its DS100 tools for diagnosing faults”, he says. “We also use Autologic and Launch UK diagnostic platforms”, The firm has also upgraded to Haynes Pro’s system to source and install the correct components first time around.

WORKSHOP TOUR
The workshop space is home to both car and motorcycle bays and even a small waste oil burner (SWOB) that wasn’t in operation during the tour. The garage is one of a handful in Leicestershire that can MOT motorbikes. As is common in rural garages, there were vehicles crammed into every available space, with cars ranging from a pretty Triumph TR4, to a number of new looking 4x4s, right down to a couple of Hyundai Coupés from the last century. “The garage’s original structure was a butchers shop and later home to a petrol station”, Taylor explained, adding that an old fashioned law imposed by the local pub still prohibits anyone from drinking alcohol on-site.

NEXT STEPS
Winning the Award two years in a row has encouraged Taylor to give the garage a revamp with the addition of a new reception area and roof to be complete in the next couple of months. “I often apologise to customers who are sitting around and explain to them that it’s not as glamorous as the main dealer, but they said just because you take it to a main dealer doesn’t mean you’re going to get a good job”, Taylor continued. “It is a bit chaotic in the reception area but they know they will get a good job done because all they want is a good service and value for money”.

With the emergence of the Connected Car and hybrid technology, Taylor is in the process of enrolling staff onto training courses and considering installing an electric charge point as more of these models enter the parc. He concluded. “At the moment, I’m looking into how we can best deal with the technology that is coming through. Courses for these vehicles are getting better because initially, they were few and far between but over the next five years, we are going to see a lot of changes”.