The noise of the Philips Automotive Lighting press briefing was almost drowned out by the sounds of many hundreds of horsepowers working their way around the Silverstone grand prix circuit.

But, since Philips is this year sponsoring a car from the AF Corse race team, it seemed only fitting to make use of their facilities at the home of British motorsport.

As well as promoting their range of Daytime Running Lights – making their way to a retailer near you very soon – this was my chance to get to know the Philips brand. As someone who is still very new to the aftermarket, I previously assumed Philips only made televisions and kettles.

How wrong I was. It turns out that Philips Automotive Lighting division has been on the cusp of motoring in the aftermarket for years. They’ve pioneered several major advances, being the first to offer all weather lights back in 1994. They were the first to offer Xenon, the first to turn their attention to economical lighting, and now they’re offering DRL lighting too.

The company says its new push into DRL is part of a campaign to improve road safety. They point out that even in the day a drivers’ field of vision is considerably narrowed by driving at high speed. So anything which can help to illuminate potential hazards is a welcome addition to the motoring portfolio.

But of course, we wouldn’t go all the way to Silverstone just for a presentation. No, we also had a bit of a tour around the new ‘wing’ pit garage, where we ended up having impromptu drinks with the AF Corse team in their hospitality tent. As you do.

And speaking of AF Corse, here’s one of the trio of cars they’ll be running this weekend at the Le Mans series race: 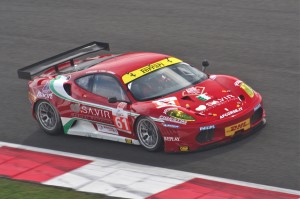 Isn’t she a beauty? We wish them the best of luck.