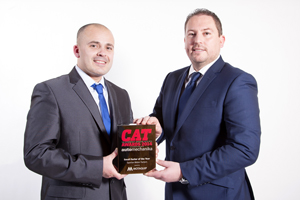 To win anything two years on the trot is impressive, let alone if you have only been trading for two years, but that is exactly what Spartan Motor Factors has done by scooping the Small Factor of the Year Award for the second time.

Lee Gratton last year credited an article in CAT that opened a few doors for the small factor as it endeavoured to establish itself, and was quick to point to the award for opening further doors, as it has signed a deal to be part of the Premier Distribution Partnership buying group as of this month.

Gratton said: “We didn’t expect to win two years running as we have only been open two years, so we have won it every year we have been open as we enter our third year.

“It has been massive for us as it has helped us get noticed by suppliers. We were struggling to get some accounts, but everybody has seen us in CAT magazine which got us lots of accounts and got us recognised.”

The hope is that its new venture with PDP buying group will allow the Welsh factor to expand further and give their customers a more competitive offering. Gratton hopes to win a CAT Award for the third time in a row, not as Small Factor of the Year but in the hotly contested Large Factor of the Year category as it aims to surpass the £1million mark this year.