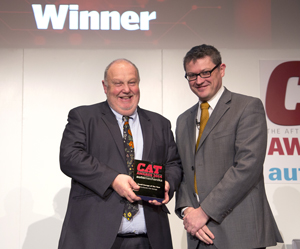 Scotlands Ash Garage was crowned the 2014 Small Garage of the Year, and in doing so fought off some stiff competition from last year’s winner Anglo Continental Cars and GH Moreton.

“Me and my wife thought wow, to be in the top three, how fantastic is that, so when we won the award my wife let out a loud yelp and a scream, and, well, I am pretty chuffed.

“For us it was nice, as we are a fairly small village garage, and we have put a lot of effort into our business the 22 years we have been here.”

Peter puts the success down to all the hard work his team and he has put in by being straight with their customers and offering them a great service.

“We are not like many other garages,” says Peter. “We do MOTs from 6:30am appointment only, and by doing that you catch people coming off night shifts.

“Plus we have 28 to 29 courtesy vehicles, so people can, and we do have one lady who drives into our place at dead on 6.30am and she is in her office in Bristol at eight in her courtesy car. Nobody is doing this and that makes us unique.”

He added that after picking up the award, he has been inundated with congratulatory messages from customers ringing up or through Facebook.