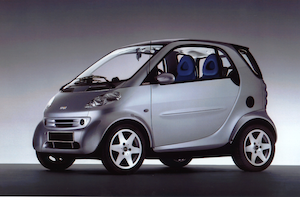 Way back in the 1990s, watch manufacturer Swatch had an idea that the manufacturing principle that it used to produce watches could be applied to cars. To cut a long and tortuous development story short, a deal was signed with Daimler Chrysler (as the company was then) and an all-new factory was built in Hambach which became known as ‘Smartville’.

Cars went on sale from 1998 with RHD versions (and official UK imports) from 2000. Having been through three generations, the two-seater model (originally known as City Coupé, latterly as For Two) it is the first two iterations that this guide is concerned with and most of this information can also be applied to the sort-live Smart Roadster. The three-cylinder petrol engine fitted to the vast majority of these vehicles received various upgrades throughout the production cycle, notably a start/stop system from 2008. There’s also a Mitsubishi- powered diesel fitted in some later cars as well as an all electric version, though these are rare.

ENGINE
The elephant in the room with petrol versions of these cars is the engine. Very early cars have a 599cc, three- cylinder twinspark unit, while later ones have 698cc and 999cc respectively. Loosely speaking, the the older the engine is, the fewer miles it will cover until a rebuild becomes necessary. According to specialist workshop Fudge Smart, the problem is with the oil control rings. These become ‘gunged up’ and prevent the oil being scraped back down to the sump. Instead it remains in the top end, causing the valves to burn out.

These engines are comparatively cheap to rebuild, but taking in a vehicle that needs such work is likely to knock out any profit that could have been made. Oil smoke and a misfire due to a lack of compression are the most common symptoms.

Not every misfire is a doomed engine. If you are lucky, it might just be the coil pack or the HT lead insulators – both are common faults on the ForTwo.

As with any forced induction engine, oil starvation can wreck the turbocharger. Luckily, this range seems to have pretty durable turbos as we haven’t heard many reports of them needing replacement.

Another common, and thankfully less serious, Fortwo engine part that puts the dash light on is the oil pressure switch. While a failing switch might be the cause of an oil leak, an intermittent illumination of the warning light may be the result of the pressure sensing part of the switch weakening. Technicians should also note that these engines are known to burn oil and therefore the oil level should be checked at the correct temperature and on level ground before diagnosis begins. (While the switch monitors oil pressure, very low oil level and air being drawn into the oil pump, has been known to cause the warning light to come on). An oil pressure check using an external, calibrated, oil pressure gauge should be used to also confirm the correct oil pressure before replacing the switch.

ELECTRICS
There’s nothing particularly wrong with the lights although unless you have pipe cleaner arms the headlamp bulbs are a swine to change.

If the car won’t start and the indicators flash nine times when the key fob button is pressed, then the key needs to be recoded.

Roadsters have a specific issue where the wipers are impossible to switch off. This requires a new motor, but at least you won’t get any parking tickets.

INTERIOR
Must and damp in the interior will probably be due to leaking quarter or rear windows as these. Evilution.co.uk suggest that this is due to the original sealant giving up. Simply re-sealing the windows should keep the inside dry.

EMISSIONS
Lambda sensors are a popular Cambiare part for these cars, often being replaced to get a car through the emissions section of an MOT test. Technicians should bear in mind that a spilt crankcase breather pipe can allow unmetered air into the engine and cause emissions related problems (causing lambda sensor and/or air flow meter fault codes). A blocked breather can increase crankcase pressure leading to increased oil consumption and again emission related issues. The breathers should be checked before replacing a lambda sensor unnecessarily.

SAM CONTROL UNIT
The SAM unit, according to 4smart.co.uk, can be a costly repair if it fails; with the main cause of failure being water ingress although this usually only affects roadsters. As with many parts of the Smart, the SAM is an unconventional design, as it is both a fuse box and an ECU in one combined unit. While it is possible to obtain a brand new unit from the dealer it is very expensive, so most in the trade will send them to a specialist for a rebuild. Note that you’ll need to send the main ECU along with it.