It’s a proud day for the team at Kings Lynn-based Snap-on equipment. The building is spick and span, and the top team, including MD Mark Ost, are sporting their best suits in anticipation of the arrival of some VIP visitors who will be attending to present the company with a brace of highly prized and prestigious Queen’s Awards, one for Enterprise and another for Innovation.

The journey to obtaining the royal stamp of approval hasn’t been easy though. Take the building for example. Originally it was a generously sized but utterly unremarkable structure on the Denny Road industrial estate. The site is a warehouse, but it is also used for customer demonstrations of equipment, and is home to scores of office workers taking customer orders and resolving queries, so when the building was in need of a refit, it made sense to transform it into an appealing place for workers and visitors alike.

However, there was no option to move everyone out while work was in progress, which meant months of disruption while staircases were moved and built elsewhere, glass installed and wiring relaid. Even the roof was entirely replaced, which took place during the ‘Beast from the East’ cold snap, which meant the office staff had to stay in their warm pullovers for several days. “Luckily, we didn’t get a single industrial tribunal,” Ost joked.

The result of months of disruption is a high-tech centre, with lots of chrome and glass, as well as a decent-sized staff break room and an outside barbecue area. Offices are open-plan and Ost told us that it is company policy for senior managers to keep their office doors physically open at all times unless they are in a one-to-one meeting. 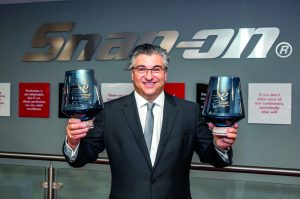 Welcoming though the new building is, the firm didn’t win the awards for an office refurb. The Innovation prize was awarded for a new diagnostic platform known as ‘Zeus’ that differs from rivals by including an ‘expert learning’ feature, wherein a central server builds up data from jobs logged and uses AI to recommend the correct diagnostic process and likely causes of faults.

Since its launch, the company has sold plenty of units across the UK via its franchised agent network. The tools have mainly appealed to garage customers upgrading from earlier Snap-on diagnostic platforms.

However, Ost recognised that the UK market for scan tools was saturated, as even just taking into consideration Snap-on products, ‘there are more tools out there than there are technicians’. The company wanted to sell into new markets, and there was plenty of opportunity in Europe as the franchise sales model wasn’t as established over there.

Deals were struck with several mainland distributors and the tool was soon a success, which made the company eligible to receive the Enterprise Award for overseas sales.

Back to today’s event, and the local mayor, resplendent in gold chains, is standing alongside someone with the title of ‘Queens Equerry’ in front of all the Snap-on staff and local press. As testament to the significance of the landmark ceremony, Ost has turned the office phones off for ten minutes, something which has probably never happened before in the history of the company. After handshakes and a quick tour of the plant, the trophies, a pair of giant glass vases, are taken to the boardroom to be put on display, and it’s back to business as usual at this hardworking company.