One halogen bulb might look similar to another, but is there a real difference? We took a trip to Aachen to find out

Anyone who has served time behind the counter of an accessory shop will tell you that bulbs will be a year-round staple of what they sell. Perhaps less clear to the vendors is the difference between them. There is a headlight bulb for every price point, with some halogen bulbs ranging between a couple of pounds up to around £30 for a top rated product.

However, the amount of light output from all bulbs has to be within a tolerance band of a certain percentage of each other, so how different can the bulbs be? We took a trip to Lumileds in Aachen, Germany to find out.

On our visit we met with Richard Armstrong, UK Country Manager for Philips Automotive and Juergen Melzer, a Consultant Engineer working for the firm.

One of the first things to address is the issue of ECE conformity markings. All headlamp bulbs sold in the UK and across Europe must conform and display the mark. “If the product doesn’t meet the standard, then the it must not be used” Melzer explained. “To get the product approved the maker needs to bring five samples to a test house to get the certificate for the conformity number from the authorities. If you own a factory, you need to declare that the product conforms”. Herein lies the problem, some suppliers, and even some well-known brands simply buy the product from various sources and the conformity, known as Regulation 37, is lost. One magazine test a couple of years back even found that a ‘matched pair’ of bulbs in a packet had been made by different producers.

TESTING
However, very little in bulb testing is subjective – and such discrepancies can be uncovered certainly in terms of testing the output and beam pattern of a halogen bulb is straightforward if you have access to the right equipment, and in this case the ‘right equipment’ is a light tunnel, more correctly called a goniophotometer, which reads the spatial distribution of light.

To demonstrate, the team show us into an internal room that is windowless by necessity. The room features a bank of headlamp clusters from different vehicles, aimed at a number of reference points over the on the far wall. “The standards specify a beam with a sharp, asymmetric cut off preventing significant amounts of light from being cast into the eyes of drivers of preceding or oncoming cars” explained Richard Armstrong. We then have a demo of Philips’ brand and known competitor bulbs, both halogen and Xenon. The meters clearly show that while the various products differ in the amounts of light produced and the colour of the light, the essential requirements of the beam and cutoff points are similar. 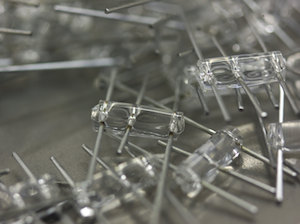 However, this isn’t the case when we are shown the results of some spurious bulbs. Although they bear the E-mark it was immediately obvious that the first we are shown (an H7) would be likely to dazzle a driver coming from the other direction as there was no clearly defined cut off. Apart from being a safety problem, such a headlamp would certainly fail an MOT.

While we are there, the team showed as an ‘explosion test’, which is just as alarming as it sounds. A pair of bulbs are switched on in a blastproof box. One is the Philips product and one is a competitor product. While the bulbs are still hot, cold water is sprayed on them. The competitor product shatters immediately, but the Philips- branded product remains intact, thanks to the properties of the quartz glass.

HIGH OUTPUT
An interesting point is the popularity of bulbs that offer increased output. These are upgrades keenly purchased by car enthusiasts and command a healthy premium over standard bulbs, which makes them popular for the retailer as well. However, some customers might not be aware that increased performance will result in a shorter life. “Sometimes the consumer doesn’t understand (that it has a shorter life) and sometimes the consumer believes that the product will have an all- round better performance, including a longer lifetime. If I could manage this, I’d be rich and wouldn’t need to work anymore” noted Melzer wryly.

He adds that such a product is referred to in Germany as an “Eierlegende Wollmilchsau” which literally means an animal that can lay eggs as well as produce milk and wool and is obviously impossible.

“We need to explain to people that if you bring more light to the road that the product will have a shorter lifetime. We can explain what we are doing to compensate this” said Melzer, saying that a number of points can further reduce the lifespan of a bulb. One is that some vehicles that have a voltage output 0.5v more than specified.

He adds that it is also important to identify what the customer wants from their bulb. If the motorist owns one of those Renaults that seem to require keyhole surgery to replace a lamp and it is driven mostly in town, then Melzer remarked that a product such as the long- life Eco Vision might be the most suitable. “You need to think about the bulb you’d reccomend that fits their needs. Of course, Racing Vision will give them more light, but I wouldn’t want to recommend a bulb that they wouldn’t be happy with. So it isn’t black and white” he said.

We round off our visit with a tour of the on-site production facilities. We visited the production line of an H7 bulb and saw the entire process from taking glass tubes (which are also produced locally using quartz crystal) through to the finished product, Along every sep of the production process, the components are tested, with around 20 production checks in total. This is completed with a final electronic test with a computer recording performance to ensure consistency, as well as a further visual inspection by a team of operators each equipped with a jeweler’s magnifying glass.

So to answer our original question, it seems that while one bulb will look much like another, the difference in performance can be very great indeed – and a good point to explain to customers who want to know the difference between one product and another.

Structure of the company

The current structure of the company that produces Philips automotive lighting needs some explaining.

Back in 2005, Philips took control of Lumileds. a San Jose- based producer of LEDs following previous joint ventures.

Ten years later, Philips took a decision to focus on its healthcare business, so it sold the LED and automotive lighting business and the newco would be called Lumileds and would continue to produce Philips-brand products under licence.

A deal struck with private equity firm Apollo Global Management, confirmed on July 7 of this year, saw the former take 79.9 percent of shares in Lumileds, while Philips retain the remainder.

Nonetheless, the products are made in the same factory as always and the only visible is the Lumileds sign above the gate.