STANDING OUT FROM THE COMPETITION 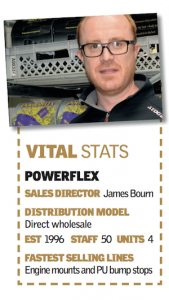 You might be familiar with the Powerflex purple and yellow livery but did you know its portfolio of polyurethane bushes are produced here in the UK?

The line-up is popular as upgrades from OE parts on cars owned by enthusiasts. Powerflex Sales Director James Bourn explains that the crux of it comes down to the materials for its steel bushes, which he says are not used by many competitors. “We use premium quality materials such as stainless steel in a lot of our products whereas our competitors tend to use a lot of plated steel”, said Bourne. “We’re a UK manufacturer so all of our R&D is done here by us”, he said, adding that the supplier also develops bespoke technical products in line with its core suspension range.

FACTORY UNITS
We’re curious to see how these products are produced, so Bourne takes us to the CNC Factory, where most of the magic happens. The unit is home to many high-tech computer-controlled machining centres and other equipment used for geometry work, metal bending and test fittings; producing bushes, engine mounts and sleeves forged from aluminium and stainless steel. Once created, parts are then tried and tested before receiving the thumbs up.

Indeed, having all of its manufacturing operations in-house has sped up productivity and product turnaround by cutting out a third party who would normally carry out the nuts and bolts of the process. Bourne expands. “Doing this internally gives us greater control over lead times and quality rather than delegating to a third party. We can diagnose and fix problems quickly, likewise with lead times, order turnaround time is fast”.

The firm’s developments of polyurethane bushes and chassis systems in general has enabled it to triple its warehouse capacity by acquiring three extra units. Apart from the CNC Factory, the parts maker has in effect knocked three buildings into one; consisting of a large manufacturing space where bushes begin their journey on conveyor belts, before they are solidified and enter a cutting and fitting area to get rid of built-up material, post production.

BESPOKE SYSTEM
To keep track, a management system has been set up to notify sales staff and technicians of customer orders coming in and the parts required for each job. This can be accessed by factory workers through computer monitors, located at multiple assembly points around the premises. “Believe it or not everything is stock controlled”, said Bourn. “The system tells us what we’ve got to make, how many and by when”. In addition, the system has helped the manufacturer organise its stockroom efficiently; allowing staff to source the correct components without any grievances. This was evident on our tour with trays of suspension bushes, mounts, and sleeves labelled and stacked tidily on each aisle so workers can locate wares and send them out to dealers, post haste.

To help customers distinguish the differences between products, the company launched its Black Series and Road Series a few years ago not only to highlight the key differences, but also allow trade customers to understand what requirements they’ll need for each one. Bourn elaborated: “For years, our parts were only fitted by people that wanted a performance edge to their car or if their car was being used in motorsport”.

“So what we’ve tried to is move away from that slightly not in terms of how we want the brand to be seen, but so we can establish that our parts are not just a replacement product but a performance and motorsport one. That’s why we launched our Road Series and Black Series – with the Black series targeting track cars while the Road Series is specifically designed for road vehicles” he noted.

PRACTICE AND LEGISLATION
The firm is a member of the Performance Automotive Aftermarket Association (PAAA), which will keep it abreast of any legislation changes that may or may not affect it in the near future. “The idea behind the PAAA is to give companies like ourselves strength in numbers, a greater voice and hopefully greater influence should there be any plans for legislation changes that could impact our business and the performance aftermarket as an industry”, said Bourn, concluding, “We’re going to keep working hard to make sure we’re developing new products and continuing to look after dealers; providing them with the best possible service whilst ensuring we continue to grow and progress as a business”.