TecDoc aims to smooth the way for suppliers and the aftermarket 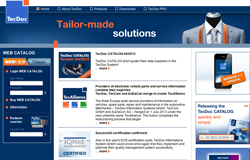 Using an online system can increase the business efficiency of suppliers communicating to retailers and factors.

TecDoc has seen a number of recent successes that not only given the independent aftermarket more freedom, but also benefited new suppliers looking to target this sector.

The BRT Group switched its cataloguing system to TecDoc, allowing factors to access its 3300 part numbers available, including timing belt kits and tensioners, building on its bearings success back in 2012 to help it increase its growth.

Charlotte Merrell from BRT said: “In order to support our growing number of customers we needed to develop our online catalogue and it was clear that TecDoc would provide us with a stable and efficient platform we could rely on.”

TecDoc has also developed the its system to allow factors and retailers expand their online offerings, by getting Ebay and Amazon using its cataloguing system, which allows the aftermarket to extend its online sales capabilities. It also allows its users to pick data on an individual supplier basis.

TecDoc’s Shaun Greasley: “For the motor factor, CATALOG will be of particular benefit to their business. It contains more than three million part numbers supported by almost two million illustrations, which covers in excess of 49,000 and 41,000 commercial vehicle applications on a platform that is compatible with all computer systems and software.”