Tetrosyl-owned lubricant brand Carlube will make its return to the British Touring Car Championship this season, as the chief sponsor of the Carlube Triple R Racing team.

The team, previously known as Ciceley Motorsport, will for the first time be running two cars in the same livery with experienced drivers Dan Rowbottom and Adam Morgan at the wheel.

Carlube’s logo will be flanked by those of chemical brand Cataclean and Mac Tools. Speaking at the car’s unveiling, Team Principal Norman Burgess said it has been “a massive job” to obtain sponsorship deals with a group of such well-known brands.

He acknowledged that having a pair of cars ‘offers not only double exposure for our sponsors but also increases our chances of scoring points in the teams’ championship’.

Burgess explained that the sponsorship package is doubly significant because of the team’s relatively small size. “We are a family team, there’s six of us full-time,” he explained, noting that it’s a landmark achievement ‘for a little team like us to have 3 major players’. 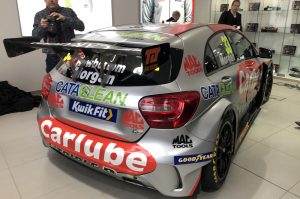 He noted that the physical logos on the side of a racing car are becoming less and less important, as fans begin to engage more with social media and digital publicity campaigns. The BTCC is, however, a potentially significant platform for the Tetrosyl brand, given its primetime slot on ITV 4 and national reach.

Tetrosyl Group Chairman Peter Schofield was on hand to explain why the partnership is so important to his brand, which has long been known for its ties to national motorsport efforts: “I am delighted to return the Carlube Triple R brand to BTCC and to team up with Ciceley Motorsport, Cataclean and Mac Tools.

“We are all aware of the benefits that the BTCC brings with huge trackside audiences and massive television coverage and fan appeal so it is the perfect shop window for us. I am looking forward to a very successful relationship.”

Carlube has recently undergone a significant brand refresh, with overhauled packaging, colour-coded bottles and easier-to-read part numbers. There are also a number of new references available in response to increased market demand.

Tetrosyl’s International Marketing Director Chris Chaplin said: “Our return to the BTCC signals our full commitment to the Carlube Triple R brand and our intention to continue to fully support our loyal distribution partners.”