THE ALLIANCE IS SET TO GROW

Archive interview with Neil Croxson, CEO of the Parts Alliance from October 2019

You wouldn’t guess that Neil Croxson, the new(ish) CEO of the Parts Alliance had spent his earlier career in finance, because whenever we asked about money, he steered the conversation onto the subject of people.

“The job isn’t just about selling parts, I sit on the IAAF committee and I love working with suppliers and customers. There are just so many great characters,” he said, referring to GSF founder Stan West and Andrew Page, son of the founder of the once-mighty factor chain, itself a founder member of the original Parts Alliance buying group, before it left to follow its own path.

“When I agreed to follow on from Peter [Sephton, the previous CEO of the Parts Alliance] probably 90 percent of the decision was about people and the kind of people that I want to work with,” he added. “I have so much respect for these men and women. So it’s an industry about people and very fine detail.” 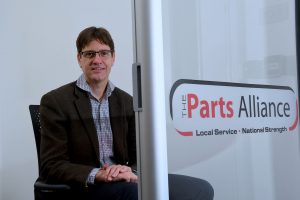 The ‘fine detail’ he refers to is the delicate balance of running a motor factor chain that is capable of making a profit, but can also deliver the range and service levels demanded by garages. Keeping stock levels right and then being able to get the parts to garages as fast as possible is essential to make sure the opposition don’t get the order, but the biggest cost that factors face is actually getting the part to the technician.

It’s for this reason that we met Croxon in ‘Midpoint’, a newly acquired central warehouse that acts as a hub across the Parts Alliance’s various sub-brands. The place is large, though not off-the-scale huge. Rather, the building has been set up to make the most of its internal dimensions in order to house 120,000 different stock references. During our visit, the place was a hive of activity, with staff picking stock by barcode at great speed. The racks were full of all the brands stocked by the business, of course, but we were struck by the number of braking products under the Drivetec house brand there were in stock, and most of them sporting the re-imaged packaging.

“It’s a major investment we’ve made in our logistics,” said Croxson, noting that it would be hard to serve the customers without having warehouses filled with products. “GSF has always had a distribution centre of course, so we are just down the road from where it is set up. Central distribution isn’t entirely new to us”.

Perhaps it’s surprising that the Parts Alliance didn’t already have a central distribution hub, as such. After all, it was over six years ago that private equity firm Hg Capital bought the group out and began acquiring the independent chains that were once its members. 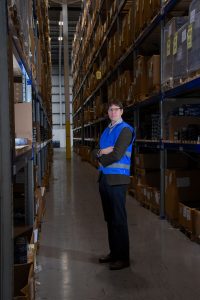 The hub is only a part of getting the maximum efficiency into every parts order. “We’re looking constantly at ways in which we can improve our processes, because if we can be more efficient, in the end it is of benefit to the garage,” said Croxson. “Keeping the garage at the forefront of our thinking is absolutely critical.”

This efficiency involves a mixture of local conditions and telemetry: “Are we routing the vans as cleverly as we can given the local traffic conditions?” wonders Croxson. “It isn’t just a case of sitting down with a map and looking at driving from one place to another. For example, many towns have a river running through them, which means there will be a bridge in the town centre where the traffic doesn’t move. It’s understanding nuances like that which will make the difference.”

“We will use telemetry to map what’s happening with the vehicles and where they are,” he added. “Technology is a huge part of our future as an industry and we’re using that technology to improve what we do. People have got used to things like the Uber app, where they can see where their taxi is, so there is no reason why we can’t do the same to see where our vans are. That technology exists to help us work more efficiently. I think the technology will become a bigger player as we go forward.”

However, it isn’t technology that will be the biggest capital spend in 2020. At a time when other chains are consolidating, the Parts Alliance is plotting expansion. “The major investment in the business will be the continued expansion of our network,” explains Croxson, adding that the firm opened a ‘jaw-dropping’ 13 branches in 2018, and another five this year. “We’re a national player, we cover most of the corners of the UK now,” he said.

At the heart of this expansion drive is the scale needed to compete at a national level. “The objective is to be able to offer our services to every garage across the country. Croxson said: “Everywhere you look on the map, there are still opportunities where we can’t provide that service to customers.” Creating a network that is truly national will, he believes, gain customer loyalty through reduced lead times. This is particularly important in a consolidating marketplace.

“The fact that there’s continued consolidation in the market recognises that what we’ve been doing is the right approach,” he said. “The market is going to change. Tech is a bigger player, driving habits are changing and cars have extended service intervals. There are changing dynamics in the marketplace and there is a need for scale. There is also a need for our customers to have scale in order to manage that.”

To plug this gap, the company needs to look beyond the mixed spread of the original buying group to fill shelf space in areas where local garages may not even be aware of the Parts Alliance or its members. Asked whether this would be achieved through acquisition or new build, Croxson replied: “We’re open to whatever opportunities are available,” adding that mapping the country had allowed them to ‘pinpoint’ where branches are required, suggesting that opening on fresh sites will be the way ahead.

One significant acquisition in 2014 was a number of branches in the South West of England picked up from the receiver following the collapse of Unipart Automotive. These branches filled a wide gap in coverage and were a significant step in the firm’s ambitions to operate right across the nation. Reusing the Unipart name wasn’t an option, meaning they were simply branded ‘Parts Alliance Southwest’. Bringing these branches into the network also meant the group was able to rehire some of the highly experienced staff from Unipart, including Paul Dineen who became Regional Business Director following the takeover.

The Unipart acquisitions were possible as at that time the Parts Alliance was owned by private equity firm Hg Capital, a decision with which Croxson, then Finance Director, was heavily involved. Given what happened to Andrew Page and others, it would be reasonable to say that the aftermarket has had mixed experiences with PE firms, but Croxson remains positive about the group’s time under Hg’s ownership. “I think private equity can have a bad name from its propensity to dip in and out” he said. “Hg Capital came in and stuck to their plan and they put their money behind it. I mean, 2014 was a difficult year for the industry.”

Croxson explained that ‘private equity’ is a catch-all term for any private money, and the strings attached will be controlled by different people with differing agendas depending on who you work with. “Any PE house is representing a set of investors. You really want to know what a PE is up to when they buy into a company. You really want to look into their funds and what they’re investing for,” he explained. “If a PE house is investing pension fund monies, then they might be more interested in turning an income stream than in turning a company and making a fast buck. Hg came in with an idea that there were a lot of independent motor factors out there. They saw that there were all these members of the Parts Alliance that were all independent, and they thought that there could be strength in bringing them together and there could be value in doing so, and they made their money out of doing so. It was good private equity”.

Hg sold the business to Canada-based parts distributor Uni Select in 2018, which displays a similar appetite for expansion, and according to Croxson has been very supportive of projects such as modernising central distribution.

However, it’s worth pointing out that the Parts Alliance, though a buying group in itself, is itself a member of larger buying group (or ‘global trading platform’ as they prefer to be called), Nexus International. Uni Select isn’t a member of any buying group so has a different sourcing strategy. This hasn’t been a problem though. “There’s a difference between the UK and the North American market. There are different vehicles on the road and different suppliers in those markets,” said Croxson.

Whoever the ultimate owner is, it seems the Parts Alliance and its people have a clear vision of the company’s future.