The art of keeping customers happy 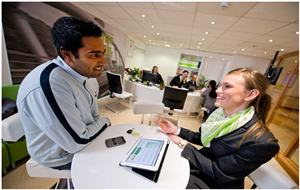 Mike Owen looks at the changing expectations of motorists and explores the importance and value to be gained from customer service training.

In the 128 years since Karl Benz produced his first Motorwagen an entire industry has grown up and passed through many incarnations to arrive at where we are now. This in turn has allowed sufficient time for some deep-rooted attitudes to become entrenched into how we operate our businesses.

Many generations have spent their working lives battling against the foibles of the cars of the time; newfangled ideas that looked great on the drawing board but when corroded and covered in road-film could try the patience of a saint.

Not only was there plenty of service and maintenance work going on, there was also tuning. It covered all things from a little light tinkering and adjustment, up to some serious engine and suspension work – the demise of which was sadly brought about by the unsporting nature of the insurance companies.

Training, in general, was sparse and knowledge was grown organically in the independent sector and seeped out from the dealerships in various pubs around the country. The quest was always to be the best at fixing cars and your capability in achieving this was the measure of your prowess with customers travelling considerable distances for their car to be given the once over.

During the last decade and a half with the shift in technology, the cascade of information from the dealerships has been greatly curtailed by various activities and the vacuum created drew various training providers in to fulfil the technical needs of our sector.

Equipment has also become a focal point for the workshop bringing a requirement for investment that was to be a further drain on profits and heighten the need for training. However, the mission statement still remains the same: to fix the vehicle.

It could be suggested that, while the industry was focusing on this aspect of their business, there was something of a quiet revolution going on behind their backs – the customer’s expectations had changed.

The basic ability to service and repair vehicles was no longer perceived as anything other than what we were getting paid for; it had become a hygiene factor, the absolute minimum that was acceptable – but why?

I was an early adopter of all things internet and quite early became aware that, initially, email and forums, but lately the Twitter-sphere, Pinterest and other forms of social-media would quickly cause motorists to be aware of what to expect from their garage of choice and ask the question: What’s in it for me?

Unfortunately, while the independent sector has been drawn into vehicle technology reluctantly, it is not had the same driver to adopting modern communication methods – either as users or participants. They say a day on the internet is a month in business, many find themselves years out of date.

Gone is the advantage of equipment, training and the ability to fix cars. From the customers perspective you shouldn’t even open your doors if you can’t fulfill these basic requirements; a new expectation has become the customers’ focus and that is their own experience.

You are now expected to communicate. TASC have been running Customer Handling training for many years – they are not alone in this, they started in the franchised sector and heralded the need in the independent garage sector. Over the last 12 months they have started to see real uptake from certain quarters of the industry.

The recent recession has had far reaching effects, and not all bad. Customers, often through imposed financial constraints, have started to ask that value-for-money question and just being cheap isn’t the answer they are looking for.

This new sensitivity in customers has rocked the dealers to the core. The customers are asking them the same questions and it is a lot harder to justify their labour charges, believe me.

A satisfactory personal experience and a total expectation that their car is in competent hands is what the customers are looking for, but how do they gauge this?

Just like the majority of the world, they can measure others’ experiences of your business, through places like Motor Codes and the new Approved Garages network.

Customer service training does exist and is steadily growing in volume and those who have embraced it are stealing the march on the rest of the industry. I’m sure training providers have got their materials ready and the motivation to undertake the training. However, the changes have to come from within, and for those who don’t change the emphasis of their businesses, they could miss this golden opportunity. Successful independent garages now need to be able to engage with customers, and satisfy them.