21 years in the aftermarket 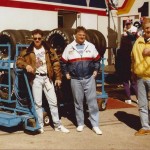 In 1991 four friends and aftermarket workers got together for a trip to watch the iconic Daytona 500 race in Florida. Jerry Bart, Paul Bingham, Robert Stevens and Russ Kinder completed the once-in-a-lifetime journey with fond memories and life ambitions achieved.1

Paul Bingham remembers the day he was invited to attend the 1991 race: “One dull Tuesday in February I received a call from Jerry, he said he had a last chance place on a trip to Daytona and was I interested, â€œyou betâ€ I said, he said â€œpack your bags and be at Gatwick tomorrow morning.” 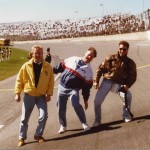 The four made it to America with time to spare, so being industrious businessmen the group made sure to visit several big American distributors before heading to the track. Once there, it became all about the race: “We had a great time,” says Bingham.

“It became clear that the Americans loved not only their cars but the freedom and independence a car brought them in this extremely large country,” says Stevens

“As for the cars themselves, both on the track and those used use on the public highway were big, brash and noisy, with drivers more interested in HP rather than MPG.”

So how did the 2012 return trip come about? Jerry Bart said: “Having realised that the big 60 was looming and yet again reminiscing about the good old days early in 2011. I had this brain wave of going again to the Daytona 500 with the same three customers 21 years on to celebrate my birthday. We have all been in touch over the years and the only problem I had was getting hold of Russ when he wasnâ€™t in a Turtlewax meeting. Anyway they all said yes and the plan to go to the Daytona 500 2012 was hatched.” 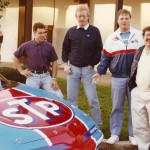 “My return visit to Daytona 500 was a fantastic experience that I would thoroughly recommend to everyone who enjoys motor racing,” says Stevens.

The American people will make you very welcome and despite petrol now costing Â£2 per gallon, are still driving around in V8 powered cars!”

Bingham says the return trip took some organising: “I was surprised when Jerry mentioned a reunion at Daytona and to be honest never thought it would happen.

“The race was amazing, canceled due to rain, reinstated, then canceled again and then run as a night race for the first time in 54 years. Â With 43 cars collectively producing over 34,000 BHP in 2 lines 12â€ from the wall and a foot apart doing over 200mph and all only a few feet from the trackside fence where you can stand, you canâ€™t even start to imagine the exhilaration, the drivers must have nerves of steel.”

All four say they enjoyed the trip immensely – and who knows? Perhaps they’ll do it all again soon.