THE ‘DISRUPTIVE FORCES’ OF THE NEAR FUTURE

A senior figure at Delphi explains some of the change to vehicles and how this could affect the aftermarket. 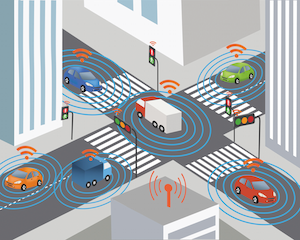 Unless you’ve been living under one of Ned Ludd’s stocking frames for the last decade, you can’t have missed all the brough-ha- ha about the connected car. Trade bodies talk about the issues endlessly and the topics are often brought up in discussions in Europe.

However, the people that discuss the why’s and wherefores are rarely the people who are actually developing the systems. As a result, there are often crucial points that are misunderstood. To counter this, we had a conversation with David Paja, Senior Vice President and President, Electronics & Safety at Delphi, who states that there are are three obstacles (or ‘megatrends’ as he calls them) that need to be addressed before the sort of connectivity that VMs and governments are asking for can be achieved.

BIG DATA
The first huge problem is the sheer volume of data that is captured by next-generation vehicles’ sensors, cameras and radar. “If you think of a vehicle on the road today, the amount of data captured by the vehicle is in the order of several megabytes per second, but as we move towards fully autonomous vehicles, there could be many gigabytes per second that could be generated,” said Paja explaining that a gigabyte is equivalent to 1,024 megabytes.

“Not all of that data is usable, but when we think of the needs of moving it around the vehicle, the needs are first of all one gigabyte per second, moving up to ten gb per second”.

Paja explained that with that amount of data, the ‘current connectivity doesn’t scale’. “We will have to rethink all of the architecture” he said. The key in how to manage all of that information is ‘centralisation,’ – or in other words, upload it to the cloud. Not all of it will have any use or relevance, in fact Delphi says that only around five percent will be stored, although that is still going to be a heck of a lot of data.

This brings Paja to the next point: What to do with all of this info, and who would want it. The answer might surprise you, as the data thrown up by cars turns out to be extremely valuable to those who know what to do with it. “In the future, a lot of value is going to be put on the data,” he said. “A lot of analysts have attempted to size the value data services business. They talk about $750bn of potential value. We’ve been adding capabilities to extract the right data and move into a marketplace where it can be monetized. So we are in a good position to embrace this megatrend.” 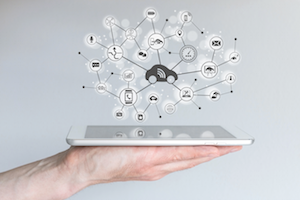 There are lots of people who want the data – and not just staticians looking to build electronic road pricing models. All sorts of information that can be useful to marketing experts and insurance companies can be gleaned from the computers by those that know how to cut to the data required. To that end, suppliers are starting to do deals with software firms that offer ‘data solutions’: Delphi for example has acquired Dearborn-based data analytics firm, ControlTec. It has also started work with a ‘data broker’, a firm that buys raw data, structures it and offers it for sale.

Don’t think that all of this computing happens on remote cloud servers though. Indeed, your own vehicle will decide what info needs to go where, so some analytics must be done on board the vehicle. This requires a sharp rise in the size of the computers. “Traditionally a computing power increase tends to follow Moore’s Law, where the capacity doubles over time, but when you think about the computing power increase needed here, it is not a linear curve, but exponential,” explains Paja. “Today, a vehicle can have up to 50 ECUs and modules. With the connected car you could double that… well, that isn’t scalable, there isn’t room on the car for a start. It isn’t practical and would be too expensive so there has to be a significant consolidation.”

The plan from Delphi, and no doubt from other ECU suppliers is to reduce the number of ECUs, including the various body control modules from the current 50 to just three large computers. “Our view is that there only needs to be three, and this will enable savings in mass production,” he said, adding that consolidating the computers and redesigning the network bus accordingly will make affordable, true self- driving cars closer to becoming a real possibility.

SERVICE
So where does this brave new world of scaled data leave the aftermarket? Asked how the aftermarket will connect to the cars, he replied, “That’s a good question, and one I’m not sure I have the answer.” Pressed further, it seems that the OBD port will only be left on the car for as long as legislation actually requires it to be there, because diagnostics data can be streamed wirelessly. This goes back to the question of ‘access to data’. The dealership will be able to communicate with the car, potentially from anywhere as it is connected to the cloud, through a channel, but the connection obviously needs to be encrypted to keep out hackers and would-be car thieves. The problem for us in the aftermarket is to identify who has the ‘right’ to also have access to these secure channels and how this right is enshrined in European law.

However, if you can get on the network then the good news is that electronic fault- finding should be a bit easier, thanks to the huge reduction in the number of controllers and associated wiring, although Paja explains that monitoring live data comes with a caveat: “It certainly does (offer diagnostic advances) across multiple controllers but the amount of incoming data by orders of magnitude… Discriminating data becomes very important when you have such a large amount of it.” The network itself will be different to the CAN that garages have become used to. Some data (firing the injectors, triggering the airbags etc) obviously has priority over other functions, but the wiring won’t be as crude as simply having high – and low – speed network wiring.

MAJOR CHANGE
Whatever happens to vehicle’s wiring looms over the next few years, one thing is clear: It certainly won’t be business as usual, for either the VMs, supply chain OEMs like Delphi, or us in the aftermarket. “I don’t think there has been a situation in automotive history where there have been so many ‘disruptive forces’ happening at the same time,” said Paja. “Electrification will be a disruptive force and autonomy as well as data connectivity. The three things are happening at the same time. There are opportunities as it is pushing companies to adapt and adapt very fast.”

Let’s hope we all manage to adapt, before it’s too late.

DEBATE OVER ACCESS TO DATA
Who will, and who won’t have access to data on the next generation of vehicles is a topic that has been kicked around by the aftermarket and by people speaking on behalf of the VMs for ages, and now the discussion has reached the Commons. Transport Minister Lord Callanan said, “Risks of people hacking into the technology might be low, but we must make sure the public is protected. Whether we’re turning vehicles into wi-fi connected hotspots or equipping them with millions of lines of code to become fully automated, it is important that they are protected against cyber- attacks. That’s why it’s essential all parties involved in the manufacturing and supply chain are provided with a consistent set of guidelines that support this global industry.”

The IMI’s Steve Nash asks who actually has access to this info, which largely falls outside the scope of the new GDPR data protection act, as it relates to the vehicle and not the individual. “With the sector currently unregulated and no national standards in place, it’s not always possible to track the people who may have access to our personal information,” Nash said. “We are working hard to get government to address this area as well as the creation of systems at the manufacturing stage, so that motorists have confidence that they are not at risk.”

Mike Hawes, Society of Motor Manufacturers and Traders Chief Exec commented: “A consistent set of guidelines is an important step towards ensuring the UK can be among the first – and safest – of international markets to grasp the benefits of this exciting new technology.”