THE GUARDIANS OF THE ARCHES 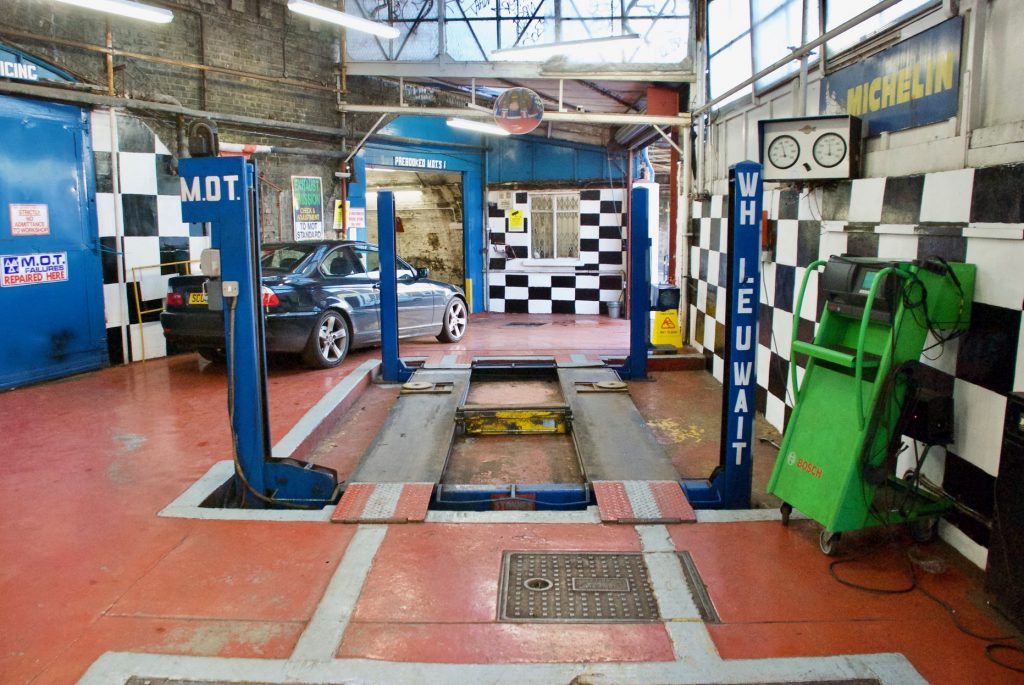 Last year, National Rail announced that it had agreed to sell off every archway property in what would become a £1.5 billion deal with private equity and property management firms Telereal Trillium and New York-based Blackstone Group.This meant that every business – and many garages and workshops – operating out of each of the 4,455 archway properties owned by Network Rail underwent rent evaluations and, perhaps unsurprisingly, prices didn’t go down.  One of these is Clapham North MOT garage, under the brick foundations of Clapham North’s railway arches, has been operating since the 60s under Ronnie Grant, now 93. Prior to the sale, the garage received a letter in November last year notifying them of a rent hike – from £33,000 per year to £147,000.

“It was a demand. End of story,” says Ronnie’s son, George Grant. “We obviously went:  ‘there is some mistake here.’” When it became apparent that the hike wasn’t a mistake, George – who recently took over ownership of Clapham North MOT from his father – and dozens of other small archway businesses formed a group called the Guardians Of The Arches. The exposure from the price hike culminated in a trip to Westminster and a meeting with Transport Minister Jo Johnson, who also brought in the bosses of Network Rail. They revealed plans for the sale. “We absolutely laid into them,” said Grant. The Network Rail figures apologised, saying that they had conducted a ‘desktop review’ of the estate, which resulted in the price hike.

But George was sceptical. He mentions that three years prior, he received a notice saying that Network Rail wanted to redevelop the garage into “a wine bar or something similar.” “How can I say it… they were being ‘creative’ in the way in which they said our garage is located on the high street. It’s not on the high street, it’s set back. We think they had ulterior motives, basically to create an estate which was highly valuable.”

To be sure, the archway properties are ideally located for enterprise. Garages around the country set up shop in similar conditions. But value is more than location and potential; how much a business is really worth can often be gleaned through community feedback, something Clapham North Garage receives in spades and which would be lost if it were sold out of business. “We have a unique way of customers and that is you look after people, it’s not rocket science. We have several generations of customer, and we do such a good job that even people who have moved out of London have come in.”

For Grant, this adds a particular sting to the price hikes. “These business were thriving in their communities. Thriving in conditions most normal businesses wouldn’t occupy because of the damp and noisy arches. These are Victorian premises, and they’re not for everybody. We’ve taken the hit as a business and set ourselves up in them with the knowledge that it’s good enough for us.”

Indeed, gentrification was one of the desired outcomes of the selloff posited by Network Rail CEO Mark Carne (who has since retired). Carne said at the time of the deal that it would bring investment “for the benefit of the local communities and it will help fund a better railway. I hope to see areas around the railway positively transformed with new and refurbished shops, amenities, and extra facilities for local people and passengers.”

Of course, Grant takes a dimmer view of matters, particularly in regards to the motives of the private firms to whom matters are being handed. “You’ve got to remember that these people are completed blinkered. They’re only interested in creating wealth. They are un-transparent, unethical, unfriendly. They do not hold their tenants in any value whatsoever.”

For now, the future is opaque. Grant hasn’t had any correspondence with the future private landlords, although he has negotiated and signed a new lease agreement with Network Rail for £59,000, which he expects to begin in the next few weeks. He’s had to adjust his business operations to account for the sudden extra expenditure.

“We’ve taken on more staff, updated our website. I’ve been promoting Clapham North in the motor racing world. I wanted to create more of an impact about what we do. From a business point of view, it’s a case of: you sit down and cry in your hands or you say ‘we’ve got to up our ante.’”

I want to preserve what my father started before I was born,” says George. “I’m going to hold onto it like you wouldn’t believe.”

Railway arch business locations are so abundant that Network Rail was technically the largest provider of small-to-medium-sized business space in the UK, until the sale. Network Rail’s initial statement explained that the sell off would create ‘a significant injection of cash to the taxpayer-owned railways infrastructure company’, allowing it to ‘focus on its core business of improving the passenger experience.’ It cites added investment towards mega projects such as the Thameslink Programme, Crossrail and the Waterloo and South West Upgrade. Meanwhile, Paula Whitworth of Network rail assured CAT that “all tenants’ current leases and rent agreements will transfer to the new owner and be protected.”

Graham Edwards, co-founder of new archway co-owner Telereal, said at the time of sale: “We and our partner Blackstone believe that our ownership of the portfolio will provide the supportive environment in which these businesses can flourish on a long-term basis … We intend to remain particularly sensitive to the small businesses that have been long-term tenants of the Network Rail estate.”