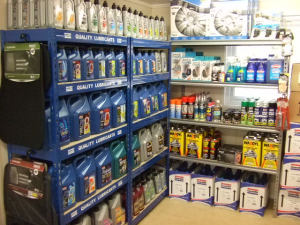 In these times where there seems to be a factor branch in every other industrial unit across the land, it comes as a surprise that that there are still parts of the UK that are undersupplied. However, this was the experience of Jonathan Davies, an entrepreneur from the Welsh village of Bontddu, Gwynedd.

With the closure of the local Unipart Automotive branch, the closest parts factor was 30 miles away. Davies decided enough was enough: “Once Unipart went that was it,” he said. “There was only CES but their prices were expensive. All the local garages and everybody was complaining because there was no competition within a 60-mile radius and that’s what made us go for it. As the old saying goes, if you can’t beat them join them”.

The new Clogau Motor Factor’s (CMF) branch comprises five 20ft-shipping containers along with a 25ft office unit, stacked on top of one another. We were intrigued to find out where the inspiration for this eccentric design came from: “We were waiting for a property to become available but we couldn’t find any in the area” said Davies. “My friend Mike Webb from the Car Buying Group said he knew a guy from Bristol who trades out of shipping containers and is doing very well. That’s how we decided on the layout”. Apart from being a factor CMF is also a retail shop and as Clogau Motors, is also a garage with MOT bay.

Davies needed an extra pair of hands and bought in Paul Merrick as Branch Manager. Merrick is one of Clogau Motor’s experienced MOT Testers, carrying 10 years of service at the garage. “Paul was happy just cleaning and valeting cars at Clogau Motors, but I thought he was too clever for this. After some convincing, he has transitioned over to Branch Manager and is doing well – he’s been really nailing it”, responded Davies.

Merrick and the rest of the staff were required to complete a four-day training programme, learning the new MAM software. Davies explained 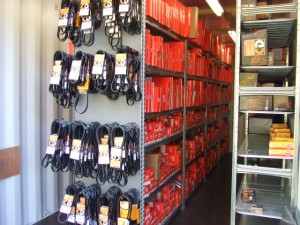 that the system has played an important role in organising the stock within the shipping containers while increasing customer accounts: “It took us a while putting all the stock on the system, but it’s good system I have to praise it. We also have an alliance with the Car Buying Group and a website with them. The Click and Collect service with the CBG has slowly built up our private customer accounts and is growing organically”. The system also caters to the general public who want to purchase spare car parts, Davies elaborated: “A lot of people are coming in and buying bulbs and wipers. People are more and more trying to service their cars themselves to save the garage expenses”.

The branch has got off to a good start with the recent purchase of their second van and the opportunity to increase the fleet to as many as six vans later this year. CMF currently hold 46 trade accounts stocking products from brands including ALCO Filters, Varta Batteries, Juratec brake discs and others.

Since the doors opened for business, the branch has secured a great amount of support from local garages and agents along the coastline: “The business is growing more and more every week”, Davies explained: “We’re getting more people not just trade customers but also more private customers now as well. People are having to travel 30 miles away to Aberystwyth to their local car parts place, so we’re getting more and more of them as well”. 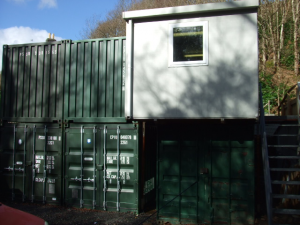 Planning ahead, the factor chain discussed their future business goals: “As Paul says to me, we are growing organically. We’re not like the big
chains, but we’re starting slowly. We don’t get deliveries from FPS everyday whereas a lot of other factors do. If the business grows, what we hope to achieve next year is going from little containers to a purpose-built unit for the place”.

The distributor hopes to expand its delivery radius to 30 miles. However, Davies believes this could be an issue because of changes in the vehicle parc: “You’ve got to remember that we’re very rural. We’re in Snowdonia. The closest drive is half an hour to the supermarket, and an hour drive to your closest McDonalds. We’re being very careful building up our stock to suit the vehicles we’ve got in the area”, he concluded. 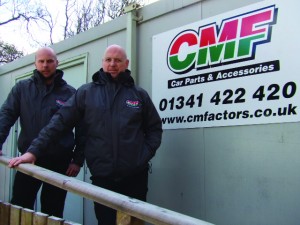