THE NORTH AND SOUTH DIVIDE 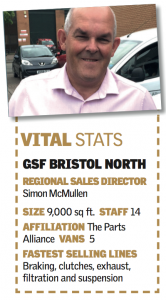 A number of factor chains have expanded their networks recently. One in particular was GSF’s Bristol North branch, which opened three months ago. We decided to drop by the firm’s latest addition to see how business has taken off since the launch.

The first thing you need to know about Bristol North is that it is the third branch in that city, with the other two known as South and Central respectively. However, these branches are not a house divided, but that the three branches function effectively as one location and with a single manager, but are able to put in to reach wider across the city than would be possible from one location.

In terms of logistics, Bristol South is the regional hub, supplying North and Central as well as various branches across West England and South Wales with stock. Area Manager Mark Donovan notes that the system has been designed so stock is quickly replenished across the business. “Bristol North is supported by the two other locations so they can keep what we can’t keep. We have an hourly van going backwards and forwards to bring stock to and from other sites”.

Inside, the reception looks like a modern car accessory shop, rather than a trade factor’s satellite store with a variety of car care products for retail customers. The sales and front-of-house team appeared polite and busy while they dealt with customer queries both face-to-face and over the phone. “Both the independent motor trade and national accounts business proved very successful within the first six to seven Weeks of opening” explained Simon McMullen, Regional Sales Director, who also joined us on our visit. “We mainly opened this branch for logistical purposes as we found there was a big avenue of customers we could service in the area” he said, adding that the M5 motorway access has helped facilitate this.

DELIVERIES
The store delivers within a 15-mile radius across its network of delivery vans and is looking to add motorcycles to the fleet.

WAREHOUSE LAYOUT
Situated at the Aztec Business Park, the new 9,000sq ft. branch employs 14 staff and includes a mezzanine floor, stocking a range of fast selling lines. Braking and service items are a few of many wares occupying the upstairs space, supplied by reputable brands including Valeo, Bosch and braking brand TRW. The ground floor is home to LuK clutches, Banner Batteries as well as exhaust silencers hanging up neatly in single file. 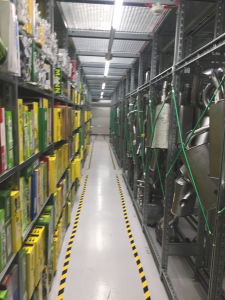 With bulks of stock being delivered to and from its neighbouring sites, we were keen to find out how the firm keeps track of purchases and customer orders. “We have our in-house system called EDP, a tool for stock management and sales,” McMullen replied. “This allows us to go back to our stock hubs in Birmingham. If you have an item that doesn’t sell in a recognised period of time, EDP recognises it and withdraws the product from the branch in question, bringing it back to the central branch where it is distributed nationally”. Staff working the night shift can expect an overnight delivery from GSF’s Birmingham hub, followed by three more deliveries via its regional distribution centre throughout the day. To take on this task, the team receive enrolment and ongoing training to control stock entering and leaving the premises.

SERVICES AND TRAINING
Similar to the Snap-on tool van concept, McMullen highlights that GSF’s kitted out tool vans have proved a hit in this area where staff will travel to local businesses and demonstrate their latest offerings to garages, while picking up leads for MOT bays, four post lifts and diagnostic equipment. “We treat all our customers as people and not account numbers”, said McMullen. “It is important that we always try to build positive and long-term relationships with them”.

Reflecting on his employees progress so far, McMullen, said. “I’m very proud of the guys and what we have achieved here. We spent countless hours painting, decorating and putting stock away before the launch of this store. It’s been a general team effort and I can’t thank everyone enough”. Both McMullen and Donovan are now aiming to bring Bristol North up to the same success of its brother and sister sites and is considering to acquire a fourth store in the city. The branch will continue rolling out new product lines as it continues to grow within the GSF group. We look forward to catching up with the team and potentially visiting another Bristol store in the near future.