Many countries – including the UK – are banning the sale of new passenger cars and light commercial vehicles with combustion engines from 2030, and the EU is enforcing a ban from 2035.

The risk is that we end up replacing one environmental problem with another. With traditional combustion engines, used parts – and end of life vehicles – are handled by mature, established aftermarket processes.

We urgently need to arrive at a similar situation for EVs, their batteries and their components, to create a circular economy that enables truly sustainable mobility for the future. LKQ Corporation, the parent company of LKQ Europe, is the largest auto recycler in the world, handling more than 800,000 vehicles per year. It’s our responsibility to keep leading from the front as the market evolves – and we’re already doing just that.

LKQ Europe has partnered with the “Production Engineering of E-Mobility Components” (PEM) chair of the renowned RWTH Aachen University in Germany to model three scenarios, from a linear to a circular economy for traction batteries. I first presented our joint study alongside Professor Achim Kampker, founder and head of the PEM chair, at the 43rd International Vienna Motor Symposium.

We looked at the costs and emissions for all three scenarios, taking into account the evolving age of the batteries in the European market at any one time, the effect this has on batteries entering the aftermarket due to defects or end-of-life, and the route they then take.

There are four options available to a battery system in connection with and after the end of its first life cycle: reuse, repair, remanufacturing, and finally, recycling.

Our first and base scenario, 0R, is linear and uses none of these routes. Defective and end-of-life batteries are disposed of and replaced with brand new ones.

The second scenario, 2R, introduces an extended cycle. Batteries that have reached their end-of-life – acknowledged by industry to be less than 70% state of health – are collected for reuse and recycling. These two paths are preceded by an assessment of the returned batteries, to determine their condition and the extent of the disassembly required.

The third scenario, called 4R, takes this further and includes aftermarket involvement during the vehicle use phase, taking into account repairs – in and out of warranty – and remanufacturing.

We can model in-depth scenarios for any given year in Europe. Let’s use 2030 as an example.

In the 0R scenario, every defective or end-of-life battery is replaced with a new one – meaning 44.0GWh of new replacement battery capacity is needed, all of which is from new raw materials. The cost is €9.6bn, and just over three million tons CO2eq are emitted.

It’s important to note that manufacturing and supplying a replacement battery accounts for fewer emissions (3.8 tons CO2eq for an average battery capacity of 54kWh) than an average internal combustion engine produces in one year (4.6 tons CO2eq). But the emissions of the 0R scenario still add up – equating to the annual output of approximately 680,000 average passenger vehicles with an internal combustion engine.

In the 2R scenario, the same replacement capacity is needed as in 0R, but more than two thirds of it comes from recycled or reused batteries. A 13% cost saving is achieved, alongside a 24% cut in emissions, compared to the base scenario.

In the 4R scenario, because batteries aren’t replaced as a whole by default, and individual modules or components can be repaired, just 18.6GWh of replacement capacity is needed. That’s a 58% drop in new battery capacity – with a further 64% cost saving to €3.0bn and another 83% reduction in emissions to approx. 400,000 tons CO2eq.

So, what does this tell us? Repair and remanufacturing are the key to reducing both emissions and cost, and to achieving a truly closed loop system for traction batteries.

Innovation is needed in the fields of battery repair and remanufacture – and collaboration is the only way to drive progress at scale.

Policy makers must provide an open and competitive framework allowing access to battery interfaces. And battery and vehicle manufacturers must work alongside one another within that framework.

Many OEMS are still focussed on product development and production, to meet the growing demand for new batteries – and many are overlooking the subsequent phases of those batteries’ lives.

These recycling efforts are welcome, but a comprehensive strategy is not yet in sight. Concepts detailing the handling of returning (defective) batteries with a remaining life span are rare and yet to be adequately addressed.

Current battery designs vary widely depending on size, architecture, chemistry and vehicle requirements – variables that complicate the transition of vehicle batteries into the various phases of a closed loop system. A standardisation across the market is necessary, alongside an OEM battery design with disassembly in mind.

These, combined with LKQ’s existing remanufacturing expertise, will unlock huge potential for traction battery remanufacturing and repair, which is critical to achieving safe, clean and affordable mobility, now and in the future. 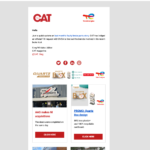 Don’t miss out. Get the latest stories directly to your inbox with the CAT Newsletter