TMD named Supplier of the Year by Autoparts UK 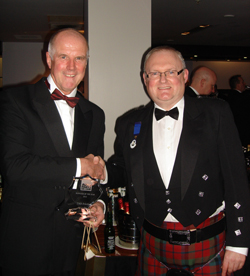 TMD Friction has won the accolade of Supplier of the Year 2013 from Autoparts UK.

The large independent motor factor, which is part of the Arnold Clark Group, announced the winner of the trophy at its Burns Night celebrations, where Richard Gleghorn, Sales Manager at TMD Friction UK, picked up the commemorative award and a bottle of malt whisky.

Autoparts managers and staff, from across its 13 branch network, voted TMD the winner after deciding it excelled across a criteria of its parts availability, technical assistance, sales support and customer service.

Craig McCracken, Group Factor Manager at Autoparts, said: “We’re unlike other motor factors in that we don’t change suppliers for short term gain, but instead work as closely as possible in ensuring our customers received the full benefit from being an Autoparts customer.

“We can only do this with the support from our suppliers and so congratulations to TMD Friction for being crowned top supplier.”

TMD’s Gleghorn added: “This is a fantastic achievement for TMD Friction and is in recognition of the hard work the entire team puts in supporting our growth with Autoparts UK.”

Customers and suppliers invited to enjoy the Burns Night festivities were treated to some Robbie Burns poems, the spectacle of professional boxing from the St. Andrews Boxing Club and haggis and neeps (better known as swede!).