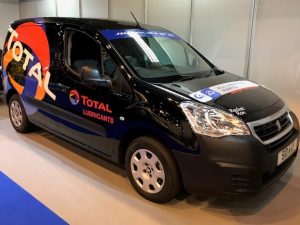 The van contains the graphics of Total Lubricants, a brand recently taken up by GroupAuto and a new key supplier All Vehicle Parts. A new strategy across the buying group’s members is to have a single brand take up 50 percent of panel space on the vehicle, with the remainder used for the factor and GAU’s logos.

Lee Dunkley, Sales & Operations Manager explained: “Previously, most factors, including us, would have vans branded in our own scheme with a few supplier logos on them. However the logos seem to get lost in the layout and did not add any benefit, so we felt we needed to change this and not to let our biggest advertising asset go to waste”.

Explaining the switch to Total, Dunkley said: “We had been a Millers Oils distributor for a considerable amount of time with great success, so when Millers decided that they did not want to be a GroupAuto approved supplier it caused a great deal of anxiety initially.”

“We were approached by numerous oil suppliers and we had to make a decision on who would be our supplier for the considerable future, as the days are gone of stocking a dozen different oil brands”

“Some suppliers also quoted that an oil is approved but couldn’t provide any proof of that being the case, whereas with Total if an oil is approved, a signed, dated certificate from the vehicle manufacturer which also contains an expiry date is available for us to give to our customers for further piece of mind.”