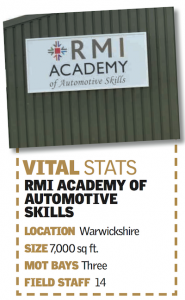 It’s been three months since the ribbon-cutting scissors were put to use at the RMI’s new Academy of Automotive skills. We were keen to pay the centre a visit to find out more about the training provided to technicians with particular attention to the new MOT tester- training and qualification set to go ‘live’ in September.

Upon arrival at the Warwickshire-based facility, you couldn’t help but take in the scenic views and fresh country air (which is another way of saying that the building is in a field – Ed) We were greeted by IGA Director Stuart James, and IGA’s Head of Member Services Terry Gibson, who set up the centre. James explained: “As a not-for- profit trade association, we set this up to support the RMI network and the entire motoring industry”. James added: “We built this centre in under three months and it was fantastic to see so many from the industry coming together to support us”.

Prior to opening the IGA ran three test pilots for the MOT Tester, Management and Motorcycle courses. “During the pilot it was all about testing out the qualification and we were pleased with how well it went when the DVSA were sitting in”, said James. “As soon as those courses finished, we have continued to run the new MOT tester course from June however, the qualification isn’t live until September so we’re very fortunate to be running it now”.

PAID OFF
All the hard work has paid off with the Warwickshire facility comprising two classrooms and an upstairs computer room for delegates to sit the final online assessment. However, the core of the facility is a large mock workshop, arranged with several MOT testing bays for all classes of light vehicle, including motorcycle, passenger car and light van. It’s hard to believe that just a few months ago this was home to a number of farmyard animals as now the centre gleams with Sun, John Bean and Hofman lifts as well as a CCD wheel aligner. As the training facility has been set up with DVSA all of the necessary floor markings etc are in place and Gibson noted that it would only take the addition of a viewing area to make it like a real test centre.

Of course, a test facility is no use, so a number of vehicles have been bought in. There are seven in total and on our visit we spotted a Toyota Avensis, a rather rusty Fiesta (which is used for demonstrating corrosion checks according to Gibson) and a large old motorbike. Additionally, a van belonging to the association is used for class VII tests.

With the academy geared up and ready to go, James provided a rundown of the latest MOT tester course: “Delegates on the course are required to do 28 guided learning hours in three days which consists of eight hours practical and the rest is classroom and theory”, James explained. “After completing the three days training and online assessment, technicians will then undertake a 11⁄2-2 hour practical MOT test at their workshop. The DVSA will sit in on the assessment and do a DV8 for the final sign off”. The added benefit of taking the fourth assessment day in the workplace has helped reduce downtime for technicians and restore that extra confidence of finishing the final exam under the supervision of an RMI staff member.

The facility consists of 14 field team staff that is responsible for running classes of nine delegates at a time while accompanying them on the final MOT practical test. James commented: “We’ve currently got 14 field staff that are involved in MOT and that number has gone up considerably. They’re in here on the days they need to be here because we didn’t know what volume we were going to have, but it turns out delegates are coming in thick and fast”. The RMI currently run up to two MOT courses each week with plans to expand this to three courses once the final procedures are put into action. James elaborated: “We could be doing two tester courses plus a managers course simultaneously, but once we get our processes fully embedded we will be running up to three MOT courses a week”.

EXPANSION
On the topic of expansion, James and Gibson have been scouting up and down the country for potential new facilities. So far, there’s talk of opening academies in south Manchester and the Basingstoke, Reading and Maidenhead areas. This will also be open to RMI members and the trade who are looking to progress and take their careers to the next level. “We have already communicated with MOT stations and sent a letter out to 20,000 garages to let them know what we’re doing at the academy” said James: “We will position ourselves to support the trade wherever it’s needed and if we need five centres we will build another five centres”.

Gibson noted that the IGA will also continue to deliver the mandatory annual training for MOT across a number of events later this year. According to recent legislation, it’s now compulsory for MOT testers to undergo three hours of MOT tester training each year that is CPD accredited. “We carried out our latest annual communications event in June by putting on an annual training event at a rugby club in Bristol” Gibson concluded: “Garages could come along for a three hour training session to complete their mandatory training and after that they would undertake an online assessment, supplied by one of the three awarding bodies for MOT training. We have got to continue with the delivery because we’re in the early stages of delivering MOT training which is our absolute focus at the moment”.