TRUST MY GARAGE AND BOSCH BOTH REVELLING IN SOME AFTERMARKET SUCCESS 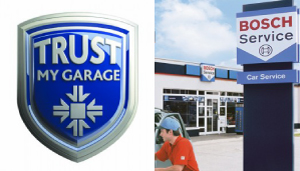 Bosch highlights its involvement with the Office of Fair Trading and now, since it has taken over approval of voluntary codes of conduct such as Bosch’s, the Trading Standards Institute.

It say it was the first to get stage two approval from the OFT in July 2007 and, as a result, is an inaugural member of the TSI era along with the Motor Code for Service and Repair from the SMMT.

Howard Price, Concept Manager at Bosch Car Service, said: “We set up the scheme to give owners real peace of mind when looking for a garage. All the independent garages in the scheme have a vested interest in delivering first-rate customer service, because their livelihoods depend on repeat business. These results show just how effective their hard work has been.”

The ‘TSI-effect’ has also had an impact on the number of garages applying for TMG membership with the IGA, says Director Stuart James.

Applications have increased by 20 percent since TMG applied to become a TSI-backed code, with 1860 on the scheme now compared with 1500 in February/March

IGA Director Stuart James, said: “The IGA is extremely pleased that independent garages have embraced TMG in such a positive way, a scheme put together for independents by independents can only be a good for consumers.

“All of our members have insisted on high standards set by TMG and through becoming a TSI code our members can offer their customers piece of mind when it comes to quality and service they will receive by using a TMG garage.”

“As a clear voice for the independent sector TMG members want us to drive out the cowboys and stand up for all the good independent garages that do a great job for their customers everyday.”

James says he anticipates TMG will gain full approval by the end of the year.

The IGA is also using the Bosch training centre in Uxbridge to offer members a range of courses which it says are tailored to independents.