TRW campaigns for shocks absorbers to be tested in the MOT 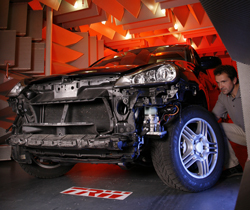 TRW has called for shock absorbers to be classed as a safety critical item and should be scrutinised in the MOT.

It believes attention should be paid to shocks in the same way as other safety parts and have its own specific test, as it estimates more than 25 percent of vehicles in Europe are putting their owners at risk by having at least one defective shock absorber.

“The foundations of our business are built on safety and defective parts put lives at risk on our roads. We will work tirelessly to communicate this message at every level until we achieve our goal.”

This TRW Corner module campaign has come at the same time as it launches its latest programme to introduce a series of remanufactured parts for the aftermarket.

TRW is keen to emphasis the affects of a defective shock absorber that it has also released the results to tests carried out in association with SECUR, which prompted the French authorities to include a leakage test into its annual test in 2009.It hopes that throughout 2014 more EU countries will follow suit, and one has already devised a test procedure for shock absorbers done in isolation with the rest of the suspension system.

TRW has also announced its first venture into supplying remanufactured parts for electrically powered steering system has been successful, and plans to launch a programme for steering gear systems later this year.

Each remanufactured part is an exchange item reproduced to its original standard, with all the seals and broken or worn components are discarded and replaced, and also includes a two-year warranty.