TYPE APPROVAL CASE TAKES TRAILERS OUT OF THE MARKET

A company pleaded guilty on March 4 at a prosecution brought by DVSA for illegally supplying trailers imported from China that were not approved for use on UK roads.

The business was supplying trailers for road use without the necessary type approval. They also failed to make records of the sales, as per t 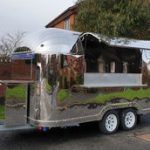 The company was fined £3,500, which is the maximum fine for this offence and was also ordered to pay £2,087 costs to DVSA.

The magistrates said: ‘[We are] concerned about the number of offences and the number of people that have paid him money. This is a matter of safety and you did not exercise due diligence’

The catering trailers, in the style of American 1950s aluminium caravans, were being sold for between £5,000 and £10,000 each. They were supplied with a certificate from China which hinted at them being certified for use in Europe. The certificates were descr

ibed by DVSA as ‘worthless and inaccurate’.

The company continued to sell the trailers for a considerable amount of time after learning that they were doing so illegally. Buyers were unaware the catering trailers they had purchased were not fit for purpose and had bought them in good faith.

DVSA’s Head of Vehicle Policy, Neil Barlow said: “DVSA’s priority is to protect everyone from unsafe drivers and vehicles. Vehicles, trailers, parts and accessories should be approved for use and show the correct markings.

“It is frustrating that this supplier took advantage of those buying not knowing the rules. Those thinking of buying trailers should check they are legal before purchase. Our message is clear: importing, distributing or selling non-type approved items for use on British roads could land you in court, and puts the public at risk.”

heir business. All light trailers must be approved to the standards required in the UK and supplied with the correct documentation in place. Where suppliers flout this law, DVSA will investigate and take necessary action.”

Aninspection of some of the trailers showed that they did not meet road safety standards in the following ways: