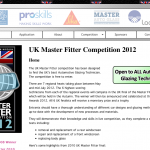 Six automotive technicians have been selected as finalists for the UK Master Fitter competition.

Following seven regional heats the group has been selected to take part in the competitionâ€™s final phase at the National Skills Show in November.

At the final competitors will be required to repair and replace a windscreen and replace a door glass panel and a rear window within a specific timeframe. As if that wasnâ€™t hard enough entrants will also be under the watchful eyes of the UK Master Fitter judging team.

Part of the WorldSkills event in 2012, the competition is now in its third year. Commenting on the final Chairman of the Organising Committee Neil Robinson said: Weâ€™re delighted that UK Master Fitter is now part of the automotive section of WorldSkills UK and thereâ€™s no doubt that it will be a hotly contested final. Weâ€™ve seen an increase in the number of entrants this year and the standard has been incredibly high once again.

â€œAll the finalists are ambassadors for our industry and have demonstrated exceptional skills in the regional heats.”