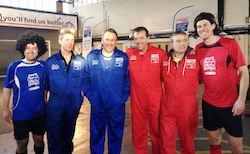 Comedy Sky Sports duo ‘The Hairy Strikers’ will host a series of football and car care challenges between Tisser, Merson and a team of UCCC technicians.

The series is aiming to promote Unipart’s “you’ll find us better” campaign message designed to drive more business to workshops. Consumer research for the campaign revealed that the core UCCC customer was a perfect match for the Sky Sports audience of ABC1 Men over 35.

As well as videos other activities will mean fans can also win prizes like a Samsung HD TV, an iPad Mini and an Xbox 360. Two football season tickets are also up for grabs.

Marketing General Manager Stuart Sims said: “Aligning ourselves with Sky Sports is the perfect fit to achieve our target objectives for the campaign. Its audience has a real passion for sport, notably football, along with the majority of British men who own cars. We want to leverage the relationship with Sky to deliver activity that resonates with the target audience by getting them involved and engaging with the UCCC brand.”