UNIPART PUTS BRAKES TO THE TEST AND ANNOYS COMPETITION 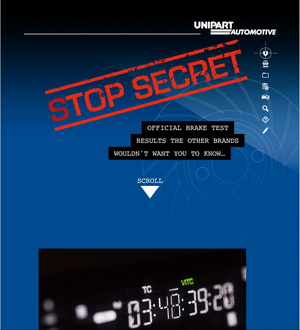 The tests were conducted by Quay Brake Testing at the MIRA research facility in Hinckley to demonstrate the quality of UA’s own line of braking products.

The results of the tests have been used in a marketing website at www.stopsecret.org. While the five rival brands tested were initially named on the site they have now been removed.

UA says this decision was taken as the reveal of how rivals’ fared was always designed to be done by sales staff who have been briefed in a series of roadshows on how to name rivals and use the results.

Unipart Automotive Marketing Director Andrew Jeffrey said: “This is about our guys going out to the market armed with the facts.”

Unlike a manufacturer reaching through a distributor, Jeffrey says UA has the advantage of continual exposure to its customer base for its message.

“We have constant customer contact, thousands of times a day, so it’s a question of drip feeding constant and consistent messages.

“We want to get back on the front foot and sparking some conversations about product. The only quality conversation we have as a market inevitably falls back on OE quality, and nobody knows what that means.

“Product quality you can talk about in a quantitative way,” argues Jeffrey, although he adds that there are too few facts to have the conversation with and that’s why UA did the braking tests.

“The market is ready to have a conversation about quality, but it currently lacks the vocabulary to do it.”

The test were all conducted with a Vauxhall Zafira 1.9 DTi, using new discs for each run.

Several different tests were conducted including high-speed braking run from 115mph and a hot stop to record distances from 62mph with high temperature components.

Stopping performance with set pedal effort from 30, 50 and 62mph were also conducted with unbedded, bedded and post fade pads. A hill hold test at 20 degrees was also done with bedded and unbedded pads.

Mean Fully Developed Deceleration (MFDD) was used to record and compare braking performance between 80 percent and 10 percent of the particular test speed. Unipart Automotive says pads with higher average MFDD figures ‘have decelerated at a faster steady state, and will result in the shortest stopping distance’.

In the four remaining tests – including bedded performance, post fade performance and unbedded hill hold test – it is ranked first. It is also, as a result, first in the overall league table.

With a total of 44 points from across the range of tests it has three more points than the second-placed supplier and twice the score of the provider in last place.

TMD has disagreed with several elements of how the tests were conducted and refuted the resulting positions for its ECP Pagid brand. Pagid lies fifth of six in the overall table with 29 points, and its best position in the individual tests is second in the unbedded hill hold test.

A five-point rebuttal of the test on the pagid.com website says the test routine was not a friction or automotive industry recognised test.

It says the brake pedal force of 150bar in line pressure is not real world since it would result in wheel lock and consequently also brings ABS functionality and tyre road adhesion into the equation. It says it is not possible to be assured that each and every application is identical, and so ‘results in uncontrolled variation’, and that the line pressure is unlikely to occur in any event as it would require full body weight.

TMD says the MFDD method also excludes the most significant portion of braking effort, from maximum speed to 80 percent of maximum.

Finally, while acknowledging that dynamic performance is paramount for braking friction, the UA tests also fail to consider other key elements of brake pad quality including pad life, disc life, comfort/judder and noise.

“The unconfirmed commentaries make no reference to the other five materials tested, suggesting selective information provided?”

Read TMD’s full statement here, while Unipart are also preparing a response to the claims, which you can read on catmag.co.uk once we receive it.