One only has to poke around Station View Garage to see that automotive diversity is the order of the day.

Our tour of the 6800sq ft workshop is soundtracked by the guttural roar of a TVR Chimaera’s V8, and takes in a variety of customer cars ranging from an engineless VW van to a crusty Peugeot 309, and even a pair of well-used Citroen 2CVs.

But times are changing, and two of the firm’s technicians have taken part in high-voltage training courses provided by Groupauto’s Auto Care network, with the aim of attracting more zero-emissions custom. But, for the moment, it’s business as usual; when asked if there’s been an uptake in local EV ownership, Co-Director Andrew Pirt says: “We see them spasmodically. There’s just not the volume.” 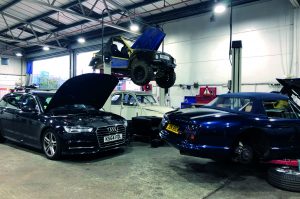 Part of the problem is the relative absence of any EV infrastructure in this rural Surrey town. “We’ve got people asking us whether we’ll be the first to fit chargers, because there’s nowhere in town apart from Dorking station,” says Knowle, adding that he abandoned plans for a pair of EV charge points when he found out they ‘would shut down the local grid’.

But the main reason for the lack of electric custom is that EVs just ‘haven’t got problems yet,’ according to Pirt’s partner Greg Wheeler, which is why the team is pursuing a slightly unconventional means of profiting from its newfound electrification qualifications.

Showing us a shiny new Hunter Elite four-wheel aligner, the duo explain that they encourage EV owners to get their tracking done to ensure maximum efficiency. “If your wheels are dragging, you could be taking 20 percent off your range,” says Wheeler, reiterating that public chargers in Surrey are scarce, making it easier for drivers to get caught short during the daily commute. 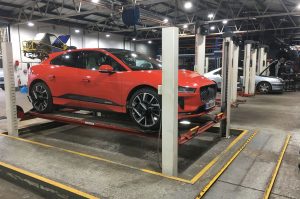 That’s not to say there’s been a notable surge in this type of work. “A lot of people are showing interest [in EVs], but I think the initial outlay is putting people off,” asserts Wheeler, referencing the £80,000 list price of the Jaguar I-Pace we arrived in. The fact that people are keeping their cars for longer could also delay the mass adoption of new technology, but there are positives to be found here as well – one longstanding customer continues to bring his trusty Ford Mondeo in for servicing, despite living 65 miles away in Southampton.

READ: ELECTRIC VEHICLES VS THE AFTERMARKET

So why get ready for electrification now, when nearly every car on the ramps still has an exhaust pipe? Well, says Wheeler, Autologic, one of the garage’s diagnostics platforms, “won’t even talk to you unless they’ve got a copy of your Level Three certification”, meaning that technical data – even tyre pressures and brake specifications, is unobtainable. He also thinks the end is nigh for combustion, stating: “We’re getting sick of diesel emission control. They’ve gone as far as they can, clearly, and they’re just trying to clean up the end product.”

But it could be a while before EVs glide, en masse, into Surrey. Wheeler notes: “We’re seeing a steady increase in them coming through the door for MOTs and stuff like that, but no significant increase in them having problems. We’re waiting to see. I think most of the independent industry is.” 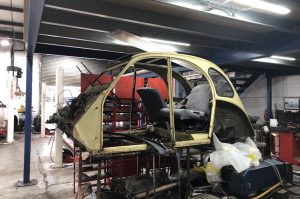 However, asked if more Station View technicians will undertake high-voltage training, Knowle tells us: “We might as well send more. We don’t know when [electric cars] are going to come in, so the bigger pool of knowledge you’ve got, the more heads you can scratch.”