There’s an old dystopian novella called ‘With Folded Hands’ by postwar science fiction author Jack Williamson, in which a new type of robot is launched with an unthinking, unflinching desire to serve humanity. Before long, the mechanical creatures have replaced the police force and then hijacked just about every professional role by being faster and, crucially, cheaper.

The ‘bots appear benign, but anyone who threatens them is lobotomised so they might live their lives in an unquestioning state of ‘happiness’ alongside their mechanical masters. The title refers to a scene towards the end of the book where the protagonist has nothing to do but sit with his hands folded as automation has taken away any occupation he could have held.

Science fiction writers have always had a tendency to scare us in order to get our attention and to make us think about the world. Williamson, Bradbury, Orwell, Huxley et al aren’t just making predictions. I think that it’s more like they are holding a mirror to the reader so they can reflect on society as it is of the moment and consider the path it’s following. All of this brings me nicely onto the subject of connected MOT equipment…

Connectivity, creeping into every aspect of life, prompts a resurgence of these fears and it is true that this technology needs to be treated with transparency and sanction.

But, at the end of the day, it would be nice to offload some menial digital tasks.

In the aftermarket, connectivity between garage equipment and a central computer has quickly shrugged off its ill-deserved reputation as a fad, thanks in part to a new set of legislation, introduced earlier this year, aimed at giving the DVSA access to MOT centres’ data. As part of the changes, regulators will only approve roller brake testers that can share test results with the DVSA, and any new MOT centres will only be licensed if they meet the new criteria. 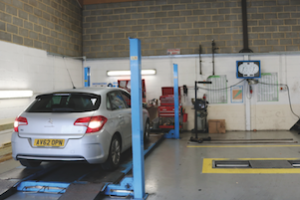 I don’t want to imply that critics of the system are in danger of losing their frontal lobe, but there can be no arguing with the Ministry’s rules. That hasn’t stopped people trying of course; IGA Director Stuart James, for example, argued the development was unnecessary, pointing to the fact that the DVSA ‘already have all the information they need’. Others across the industry have been quick to sing the praises of connected hardware. Some garage directors predicted a decline in MOT fraud rates, while others saw it as a way of emulating some of the benefits of other countries’ state-operated systems.

As an MOT tester myself, I test around six cars a day, trotting from one computer screen to another, jotting down notes on a piece of paper to then take all of these notes to yet another computer and then laboriously enter those same digits into that software, before reading and checking it all again, and woe betide the technician that, for whatever reason, inputs incorrect information.

Human error, of course, does have the potential to creep in, especially with boring, repetitive tasks, and to correct those mistakes can lead to a snowball effect of work for both the MOT station and the DVSA which inevitably takes a bite out of the bottom line.

I’ll admit that the thought of buying yet more equipment to enable state-mandated computing to improve testing does raise financial concerns for me as a business owner. But if it means less time keying in entries, less downtime as a result of errors and a faster MOT test time overall, then perhaps it is time to accept automation.

The Japanese interpret folded hands as a gesture of thanks – and maybe we should, too.