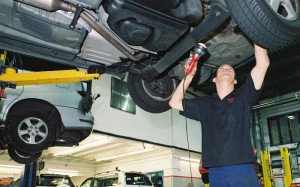 Franchises are winning more and more service and repair work from independents according to a new survey by a consumer motoring website which is running aftersales campaigns with manufacturers.

The results of the motoring.co.uk survey of more than 1500 motorists shows a five percent drop in consumers planning to use independent garages and workshops compared with a year ago.

Although half of all motorists will still use an independent, according to the survey, of motoring.co.uk Sales Director Chris Green, wants the site to help a swing to franchises.

He said that the site has worked on aftersales campaigns with Seat, Volvo, Vauxhall and VW over recent months to push the perceived benefits of taking a car to a franchise.

“This has involved targeting the exact type of consumer, with the right age and make of car, helping with retention and loyalty which is needed by manufacturers and dealers in such a tough climate.”

Green went on to say that motoring.co.uk is actively pushing the message that franchised dealers prices are not that much more than independent garages, technicians are trained better and use parts outlined by the manufacturer. One benefit includes the superior service that customers can expect to receive, claiming that the small things like free tea and coffee really count.

However, other studies show there is reason to remain positive, as Castrol’s Trend Tracker for 2012 shows that the independent sector has grown its share of the service, maintenance and repair market by 12 percent to 54 percent. As well as three quarters of MOTs being carried out by independents, which has enhanced the chance of customer retention by supplying manufacturer specific service and parts.